With its suspension cables, Tran Thi Ly bridge forms an upside-down capital “Y” and is intended to look like sails facing towards the East Sea. The bridge has emerged as a must come feature of Da Nang and an ideal place for you who like taking souvenir photos during their stay in the city. 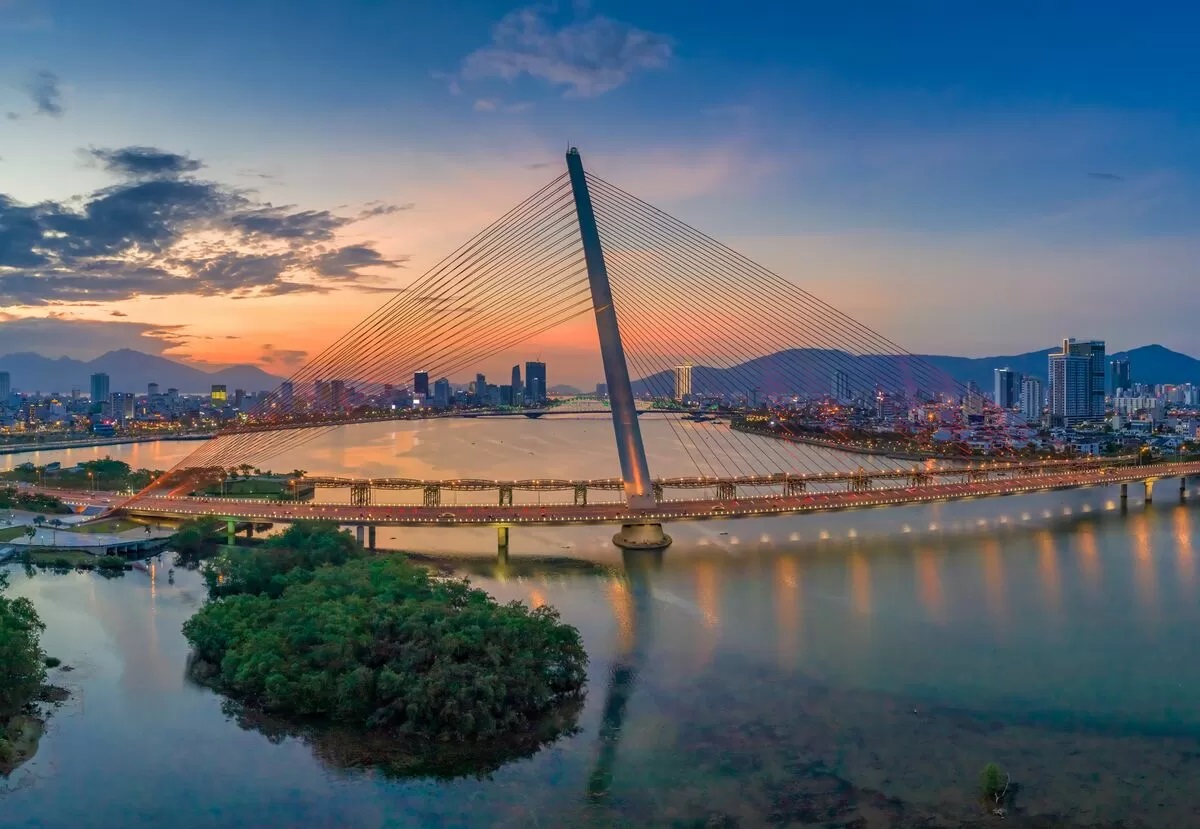 Before the building of the Tran Thi Ly bridge could begin, an older bridge had to be removed from the same site. Built by the French over 60 years ago, the De Lattre bridge was the first bridge to span across the Han River. In the 1950s, experts from the USA arrived in Da Nang to conduct surveys on the Son Tra Peninsula and the Marble Mountains. At that time, the French colonisers embarked on turning Da Nang into a military base through the construction of new infrastructure and upgrading the existing. Amongst the new constructions was the De Lattre bridge to link the inner-city with the port of Da Nang. The bridge had the important role of facilitating the transport of aid coming in from the USA to the French in the city. 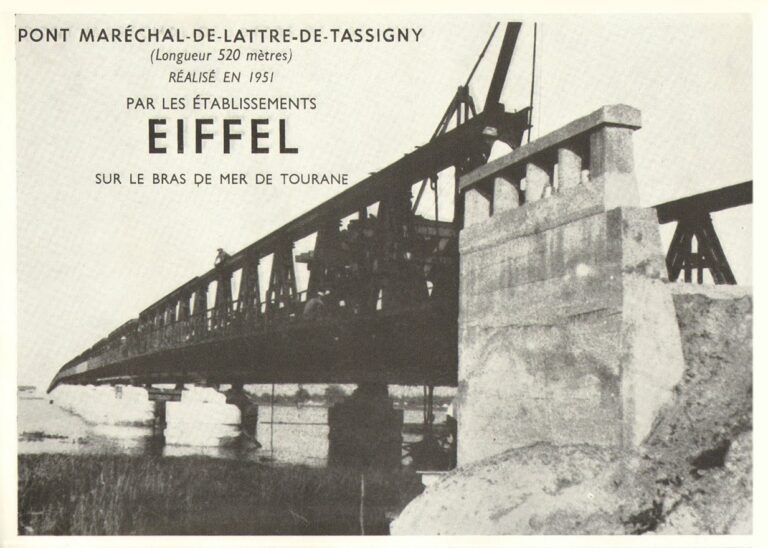 By 1955, all the local streets whose names were in French had been renamed in Vietnamese, except for Pasteur and Yersin streets which were named after two great benefactors of humanity.  During this period, the De Lattre Bridge was renamed the Trinh Minh The bridge after a military official under the Republic of Viet Nam during the 1954 – 1975 period. 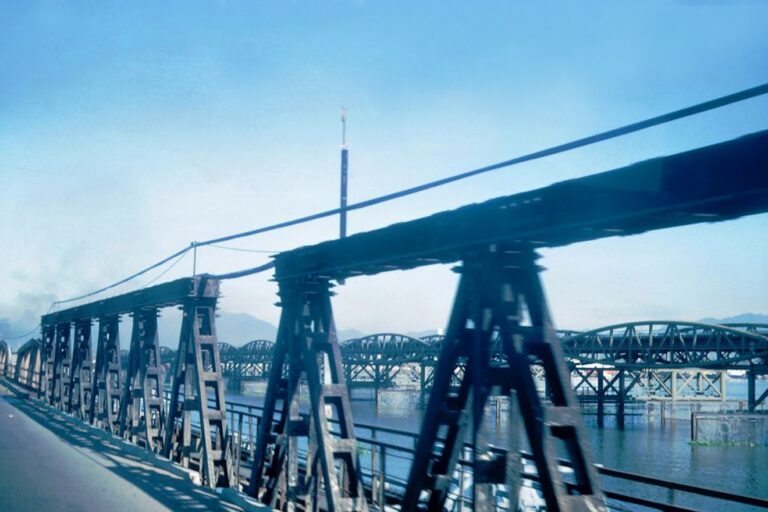 The bridge was named after Vietnamese revolutionary activist Tran Thi Ly from Quang Nam Province’s Dien Ban District, whose real name was Tran Thi Nham. She was a member of the Viet Nam People’s Army and the South Viet Nam Liberation Army. During the past two resistance wars, even though Miss Ly was brutally and inhumanely tortured in the prisons of the invaders, she showed her indomitable spirit and admirable bravery, and she never revealed any of Viet Nam’s revolutionary strategies and plans to the enemy. 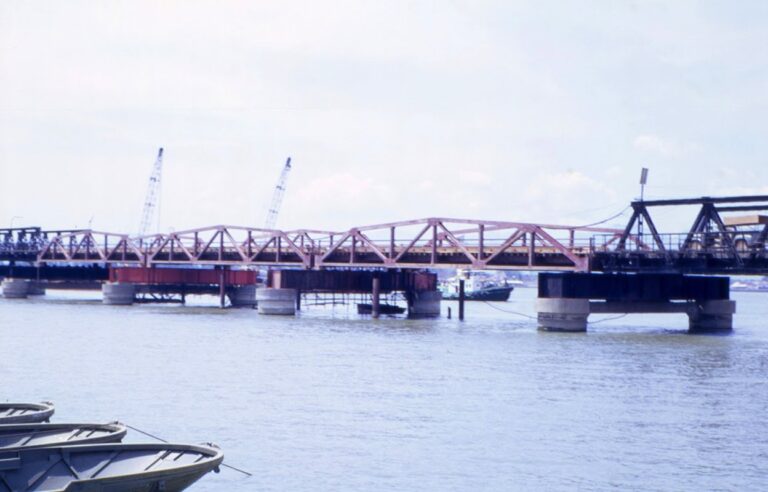 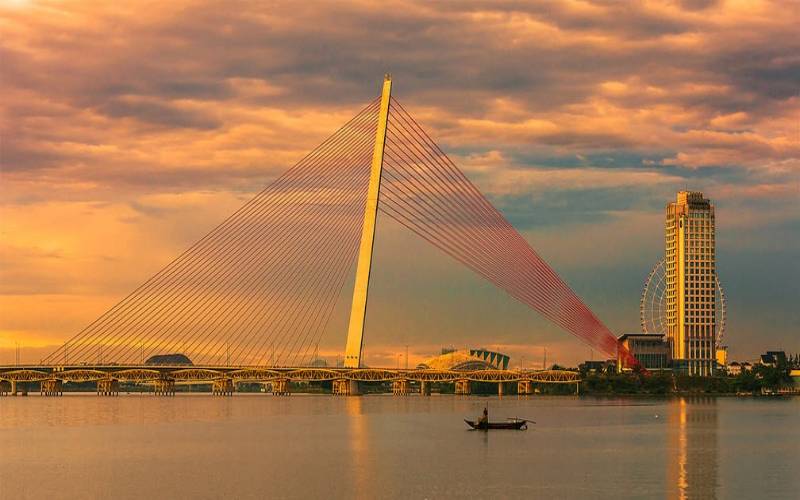 The bridge uses a 3-way cable-stayed system with inclined cable-stayed pillars to create a fancy bridge shape combined with a leaning tower up to 145 m above sea level. The bridge resembles the image of a sail stretching the wind from the Han River to the East Sea. 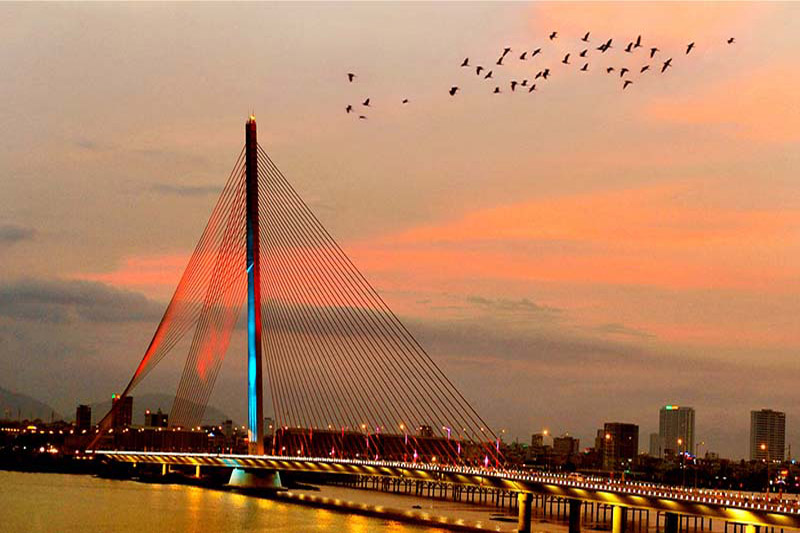 Things to do at Tran Thi Ly bridge

With a soft and elegant beauty, adding a little bit of femininity but no less unique and modern, Tran Thi Ly bridge has become an attractive attraction for many tourists to admire and sightseeing as well as take photos to save many memorable memories whenever visitors have the opportunity to travel to Da Nang. 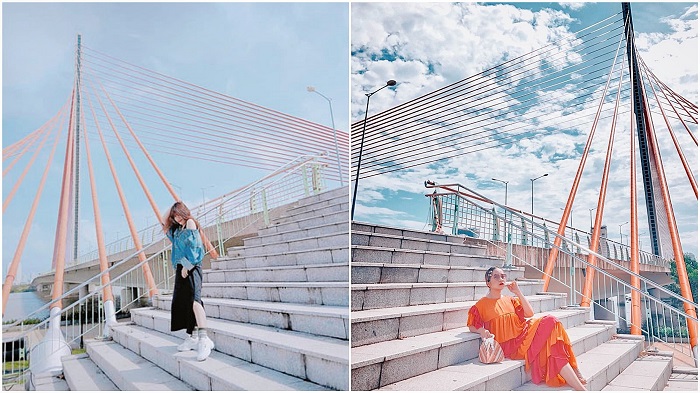 At night, Tran Thi Ly bridge becomes more and more impressive and beautiful, shimmering in the sky with a modern equipped lighting system. The bright lights radiating from the bridge spread in the shadow of the immense Han River, making many tourists “stop” and bewilderedly watch. From here, it is great to zoom out to see the young city of Da Nang at night as well as immerse yourself in the cool breeze in an extremely refreshing and airy space

From the Tran Thi Ly overpass in Da Nang, you can fully enjoy the poetic beauty of the Han River with its bustling banks. This is also an ideal place for you to admire other unique architectural works of the city such as the Han River Bridge, Dragon Bridge, and Thuan Phuoc Bridge.You will be spoiled for free in front of the windy scenery, both poetic and lyrical but also modern and personal. 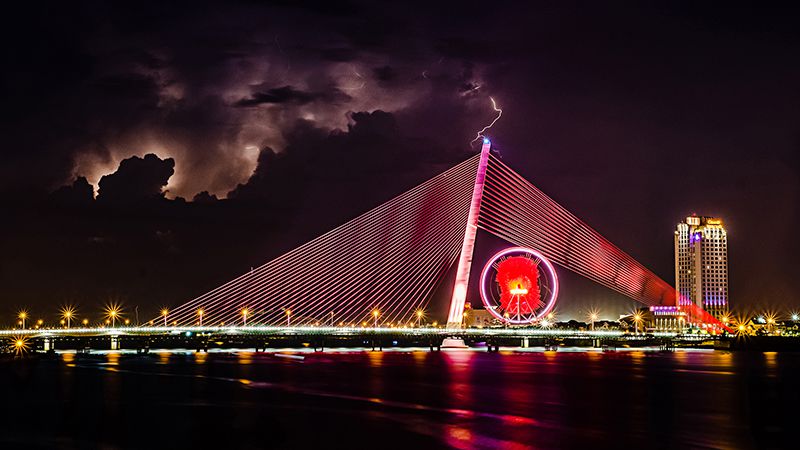 The evening is the time when the two banks of the Han River are lit up by street lights and splendid lights from high-rise buildings, restaurants, and signs. Tran Thi Ly bridge is a great place for you to immerse yourself in this colorful shimmering party. 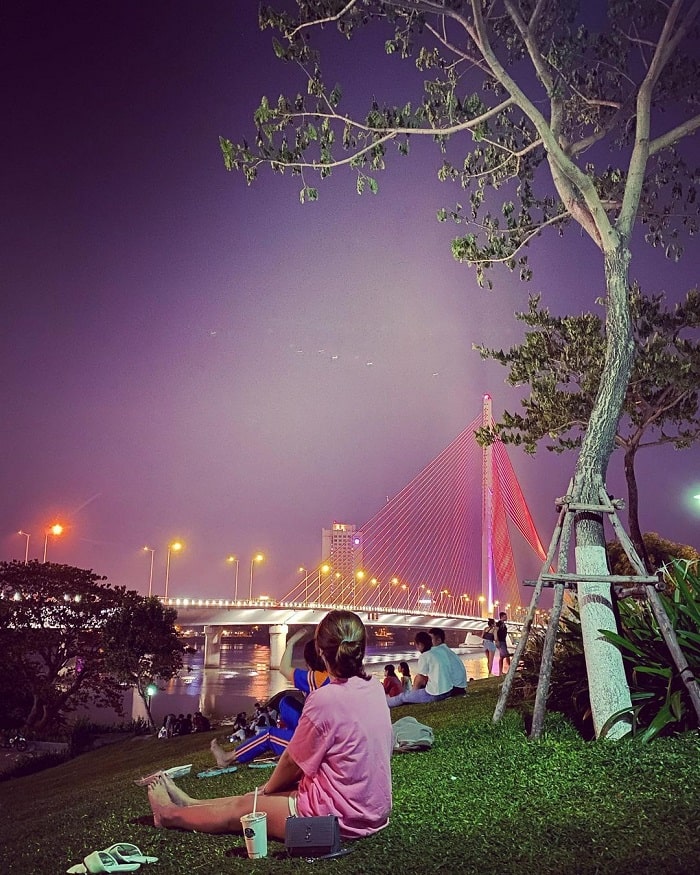 You will be excited by the vibrant, modern nightlife scene on both sides of the Han River with shops, people exercising, dancing, and bustling street music activities.

Honestly, Da Nang is famous for its many snack areas with bold flavors and living styles of the people here, and the snack area at the foot of the Tran Thi Ly bridge is a symbolic place for that. 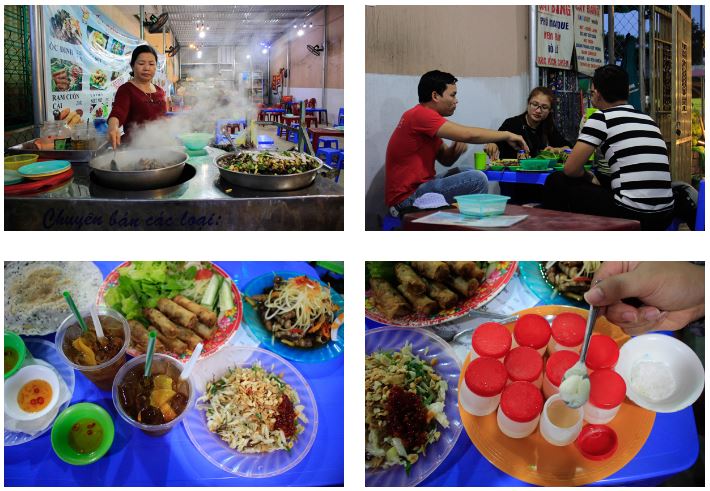 This snack street has more than 20 stalls, each stall has the same decoration and layout, the menu is the same and the taste is not much different. The menu is quite diverse because there are many dishes: salted yogurt, sucked snails, ram rolls, mixed jackfruit, chilled jackfruit, mixed rice paper, sandwiched rice paper, dried beef, cheese sticks, fried fish balls, mango toad, and guava pickles…Each dish not only has an eye-catching decoration but also has a delicious flavor that can’t be described in the word. The bustling street starts from 3 pm to 11 pm every day. This is considered an ideal place for us to meet friends and enjoy the food. It’s great if you can choose the right time and place to experience it here.

Interesting bridge over the Han River, located south of the famous Dragon Bridge, the cable stay construction is unique and is lit up at night.

da nag has few cool and impressive bridges and this is one of them. it is located in the heart of the city. and at night it gets very bright and colourful. i liked it.

Tran Thi Ly Bridge was seen each and every day from our place! We sure enjoyed it and its colors that kept on changing!!

Getting to Tran Thi Ly bridge 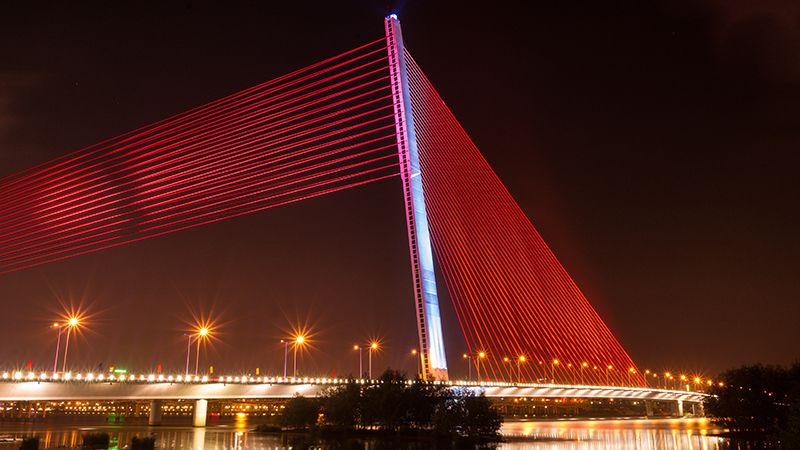 If you want to visit the Tran Thi Ly bridge in Da Nang, finding the way here is very simple because the bridge is located right in the city center. Starting from Da Nang International Airport, you go along Duy Tan Street and then Tran Thi Ly Street for about 15 minutes to reach the bridge.