Located in a rain forest like setting, the amazing complex of the My Son Sanctuary is certainly a highlight when visiting Hoi An in Vietnam. It will transport you from the busy Vietnam city life to a Jurassic park setting rich in history. 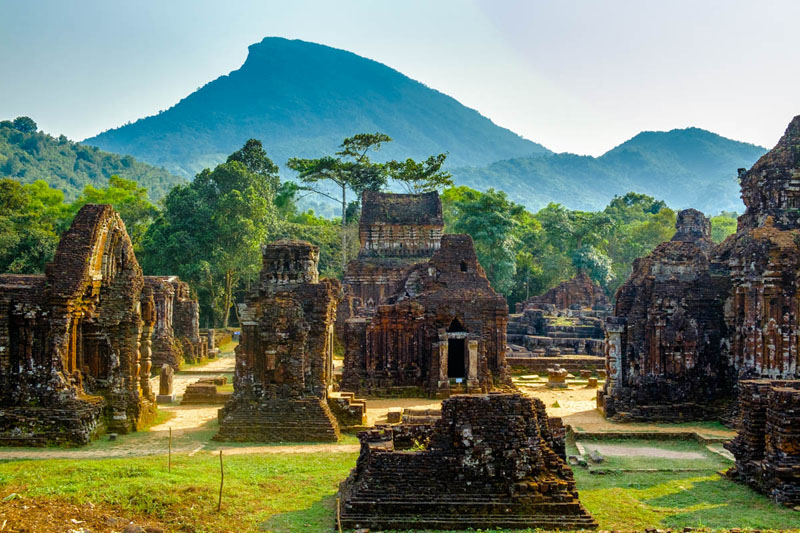 The grounds are a UNESCO world heritage site and it is marketed as the Angkor Wat of Vietnam. Though, having been to both it is certainly not as impressive as Angkor Wat in Cambodia. This largely due to the volatile history in the area which destroyed many of the temples.

The history of My Son Sanctuary

My Son is a complex of Hindu temples, which were the religious and political capital of the Champa Kingdom. It is the most significant Cham site within Vietnam, and one of the most important in South East Asia as well. The temples were built between the 4th and 14th century AD by the King Bhadravarman. They were constructed out of fired brick, sandstone bas-reliefs and stone pillars. The purpose of building the complex known as My Son was to worship the Hindu god Shiva. 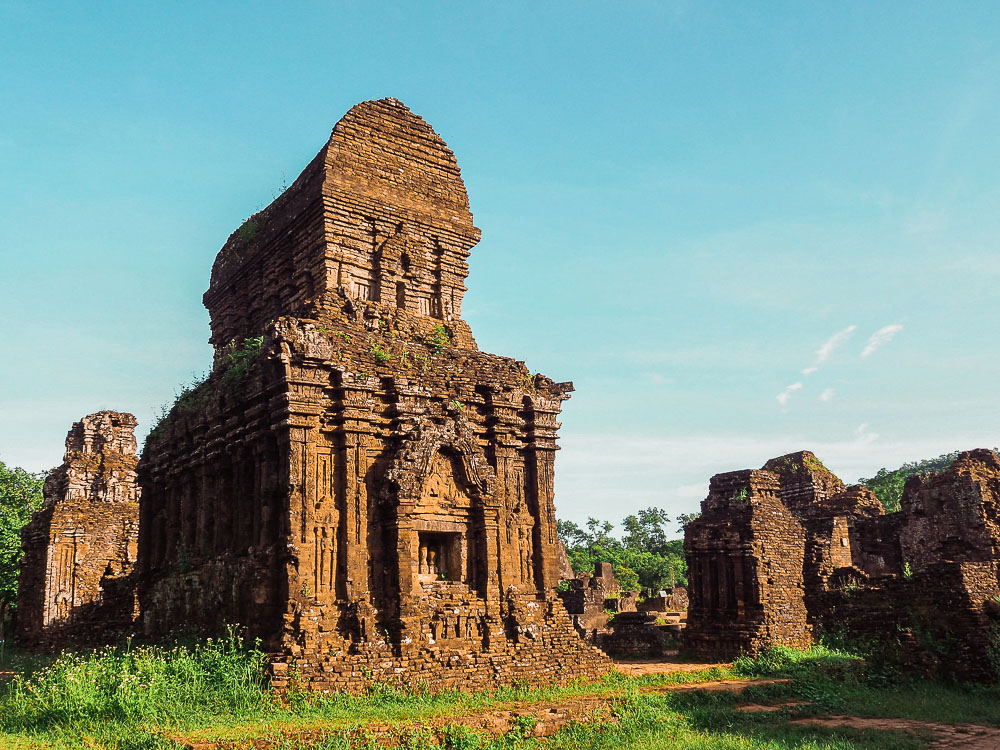 During the time that My Son was occupied it was used for religious ceremonies by the kings of Champa. As well as this, it was also used as a burial place for those considered of Cham royalty and national heroes.

In 1885, French architect, archaeologist and historian, Henry Parmentier and his colleagues began work on the site. During this excavating and documentation period they discovered 72 monuments within a two kilometer wide valley. Though, unfortunately during the Vietnamese war the US began dropping carpet bombs in the area. Within a week the majority of My Son had been destroyed.

Best time of day to visit

The My Son Sanctuary is open Monday – Sunday from 6:00am to 5:00pm. The temperatures can get quite hot in this part of Vietnam, so the best time of day to explore the My Son complex is certainly early morning or late afternoon.

As you enter the gates to My Son Sanctuary there is a courtesy buggy that will transport you from the main gate of the park to the start of the walking trail.

The trail at My Son Sanctuary is very easy to navigate and it will lead you through the abandoned complex of the magnificent Hindu ruins.

What to expect at My Son Sanctuary

To get into My Son there is a an entry fee of USD 12/VND 270,000 so it is a little on the pricey side. Though, it is unlike any other temple you will see in Vietnam and well worth the money. Included in this fee is the admission to the temple complex itself as well as a museum.


This old set of temples and towers has earned the “ruins” tag through hundreds of years of natural decay along with some bombing action during the Vietnam / American war. The result is an atmospheric little complex of ruins partially reclaimed by nature. The central group is by far the most impressive and has stood the test of time better than the others. This collection of orange brick structures, including temples, towers and alters is incredibly peaceful and atmospheric, but only if you don’t have to share it with hundreds of other people (more on that later though). 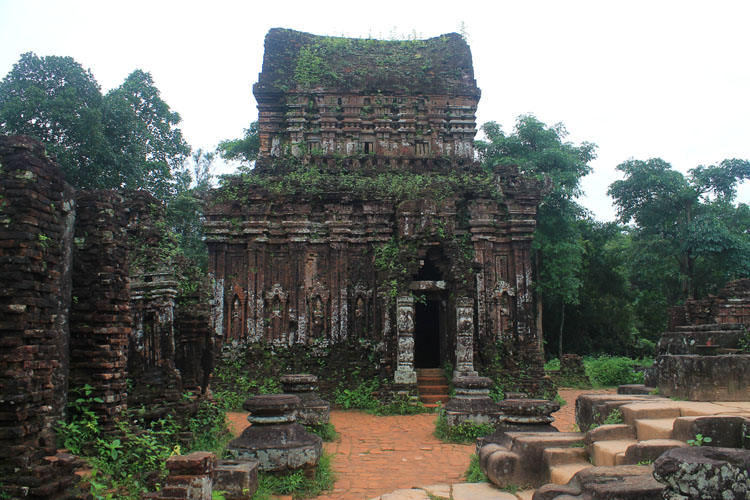 The other groups are worth checking out but the scale and number of buildings diminishes once you venture away from the main group. The big bright orange temple set on top of a small hill (seen below) is another highlight, but many of the other structures have been almost bombed out of existence. The whole My Son site is full of lush greenery and is surrounded by mountains — again it’s very peaceful when you don’t have to share it with anyone else (you can see where this is going…). 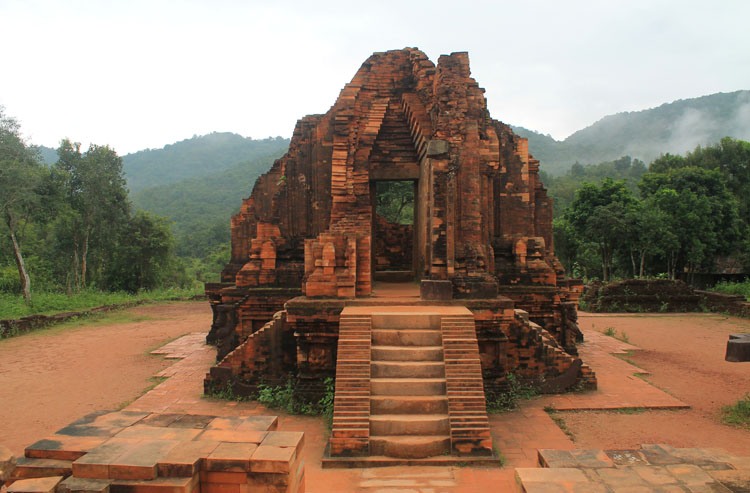 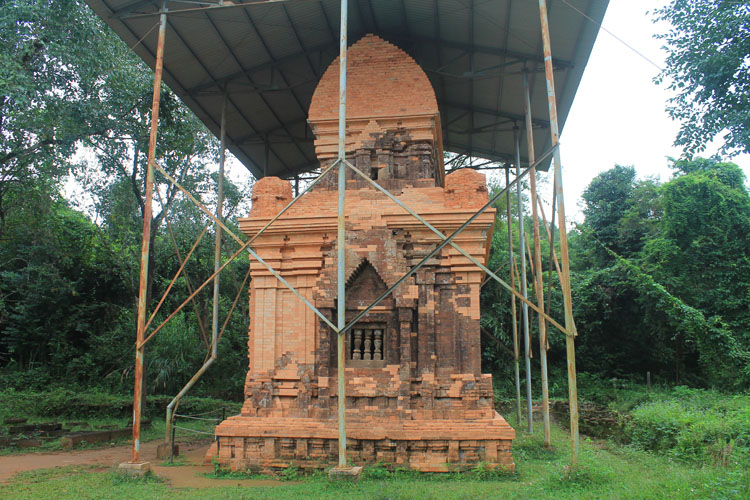 A lot of the finer details are missing (or stolen) from the My Son ruins, but you can walk inside one of the structures at the central group to see some carvings and statues. 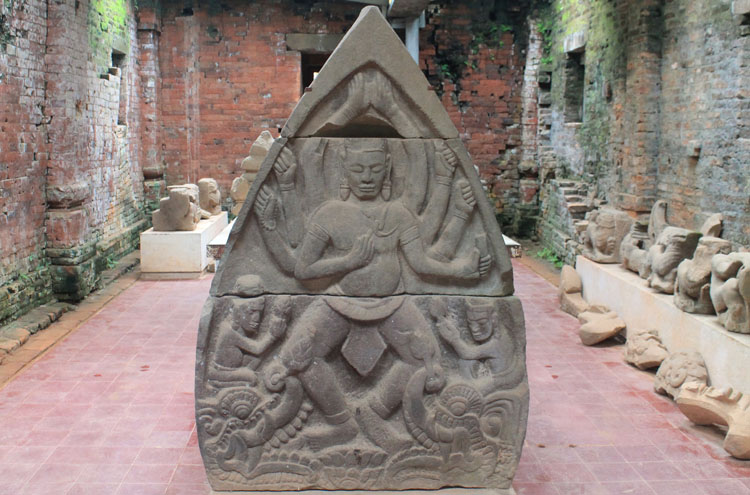 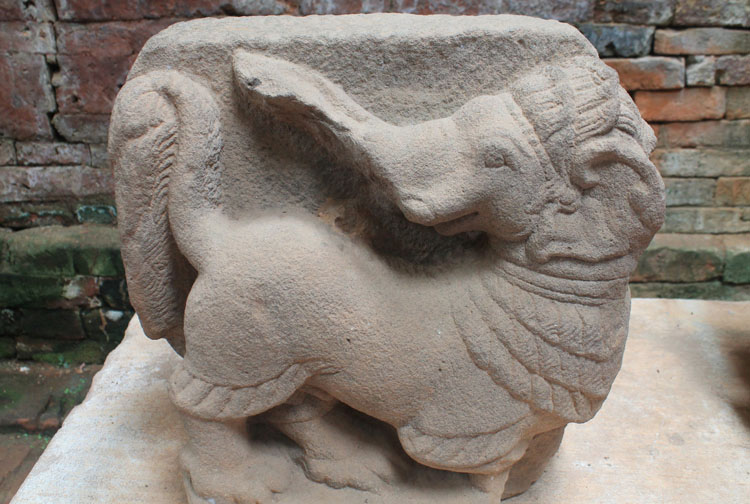 How to get to My Son Sanctuary

Approximately an hour drive outside of the busy tourist city of Hoi An is My Son. Located within the village of Duy Phu the complex stretches out two kilometers withing a valley and is surrounded by mountain ranges.

There are basically four options of how to get to My Son from Hoi An; either motorbike, bicycle, private car or on an organized tour.

Riding a motorbike to My Son Sanctuary

This option is basically up to your discretion based on your driving skills. Obviously this is the cheapest option, even after paying for fuel and parking. Though, depending on your skill set it might not be the safest option.

The roads within Hoi An may be okay to drive. Though, venture out onto rural roads and be prepared for massive trucks, potholes and questionable driving techniques.

Riding a bicycle to My Son Sanctuary

If you’re looking for a full day trip along with a workout, an interesting way to reach the My Son temples is with a guided bike tour (Ex. Bike Tour to My Son Sanctuary from Hoi An). This would probably take Lance Armstrong levels of endurance and steroid abuse but it’s doable.

Hiring a private car to visit My Son Sanctuary

This is definitely the most expensive option, especially as you will have to pay the driver to wait around while you explore the complex (Ex. Hoi An Private Car Charter). Though, if you have it in the budget this is probably the best option as it will give you the freedom to stay as long or as short as you wish.

Booking a tour to My Son

This is probably the most popular option and is surprisingly affordable. Though, you will have the restraint of being with a large group. Ultimately, restricting the amount of time you can explore. If you prefer to join an organized tour, you can opt for a My Son Sanctuary Day Tour from Hoi An, Explore My Son Sanctuary Half Day Tour, My Son Sanctuary from Hoi An with Thu Bon River Cruise.

Should you visit My Son? Everyone should visit My Son if they are in Hoi An or Da Nang. It is a great way to spend half a day learning about the Champa people and Hinduism. Though, you should think about what is the best way to get to My Son and explore it; whether that is going solo or taking a tour. Depending on your travel style and your true intentions in visiting this amazing site will result in what is the best for you.