Da Nang Museum of Cham Sculpture is one of the most fascinating museums in Vietnam. It’s home to several cultural artifacts in the Central and Central Highlands of Vietnam, preserving the spirit of the ancient Champa Kingdom. If you’re in Da Nang, this museum is a must come. 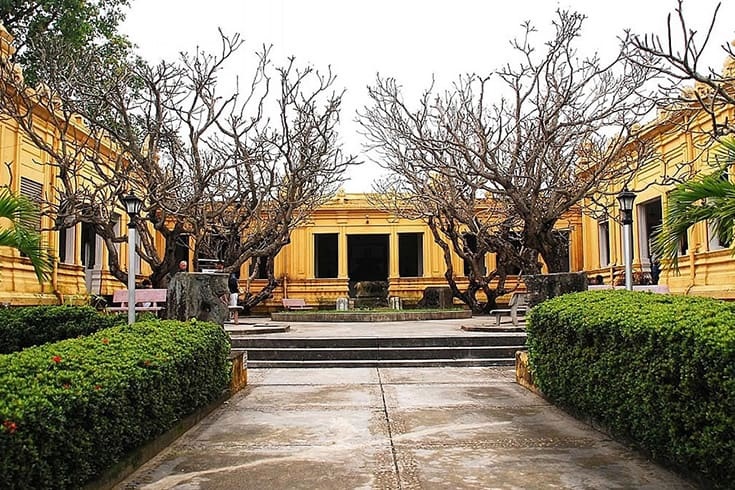 According to Chinese chronicles, the Champa kingdom was founded in 192 A.D and had different names such as Lin-Yi, Huang-Wang and Chang-Chen. Its territories stretched from south of the Ngang Pass in Quang Binh Province to the delta area of the Dong Nai River in Binh Thuan Province. It included the coastal plains, highland and mountain ranges. 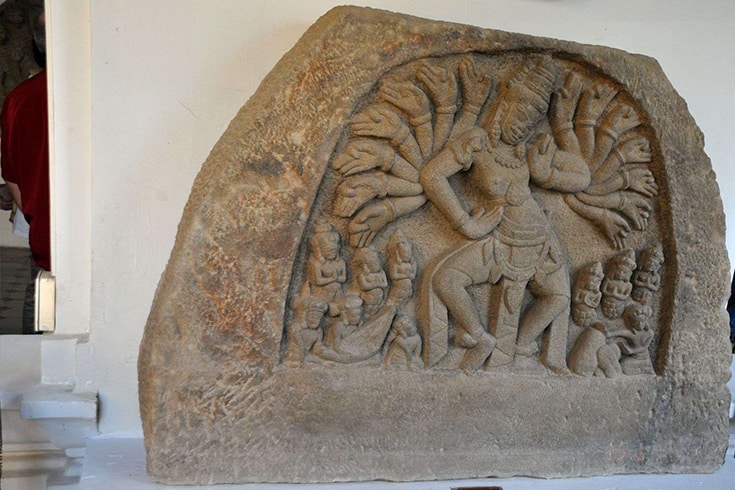 Influenced by the early Hindu civilization, the Champa kingdom was a federation of several smaller states called Mandala and comprised several ethnic groups.

The most important legacy of the Champa Kingdom is located in Central Vietnam in the form of brick temples and towers which are scattered over the coastal lowlands and highlands. The structures date from between the 7th and 8th centuries to the 16th and 17th centuries and are concentrated in Quang Nam, Da nang, Binh Dinh, Khanh Hoa, Ninh Thuan and Binh Thuan. 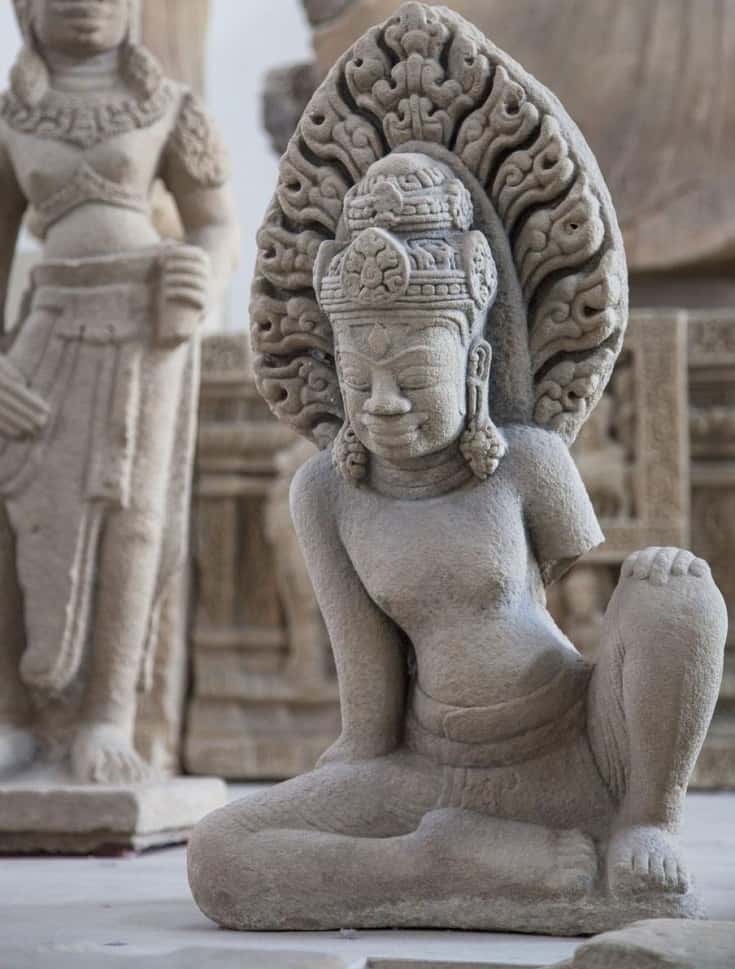 The development of Cham museum

The museum’s first building was opened in 1919, but many Cham Sculptures collected in Da Nang and elsewhere were brought to the site over the preceding 20 years.

The collection was begun by French archaeologists and experts from L’École Francaise d’Extrême Orient (EFEO). Some artefacts were sent to Paris and others to the Ha Noi and Sai Gon (now Ho Chi Minh City) museums, but many typical objects were left in Tourane (now Da Nang). 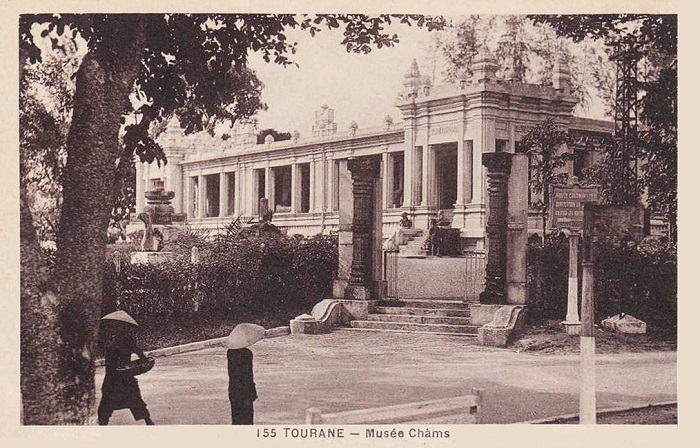 The establishment of a Cham sculpture museum in Da Nang was first proposed in 1902 by the Department of Archaeology of EFEO. Henri Parmentier, a prominent archaeologist of the department, made great contributions to the campaign for its construction. The first building was designed by two French architects M. Deleval and M. Auclair. The Museum has been extended twice, but the character of the original architecture has been well preserved.

The first extension was in the 1930s, with two new galleries providing display space for the objects added in the 1920s and 1930s. Henri Parmentier directed the display based on the areas where the sculptures were found. The 1,111 square meter of floor space was arranged into the My Son, Tra Kieu, Dong Duong and Thap Mam galleries and the Quang Tri, Quang Ngai, Binh Dinh, Kon Tum corridors. 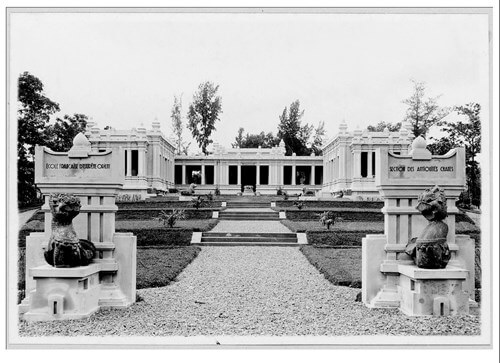 In 2002, the Museum was again extended with the two storey building provide an extra 1111 square meter. The new building provides space for display, storage, a library, restoration workshop and offices for staff.

Similar to other cultural venues, Da Nang Museum of Cham Sculpture has specific opening hours, which are from 7 am to 5 pm every day. In addition, you will need to purchase an admission ticket of VND 60,000 (USD 2.5)/person. Make sure to read the discount section for more details. 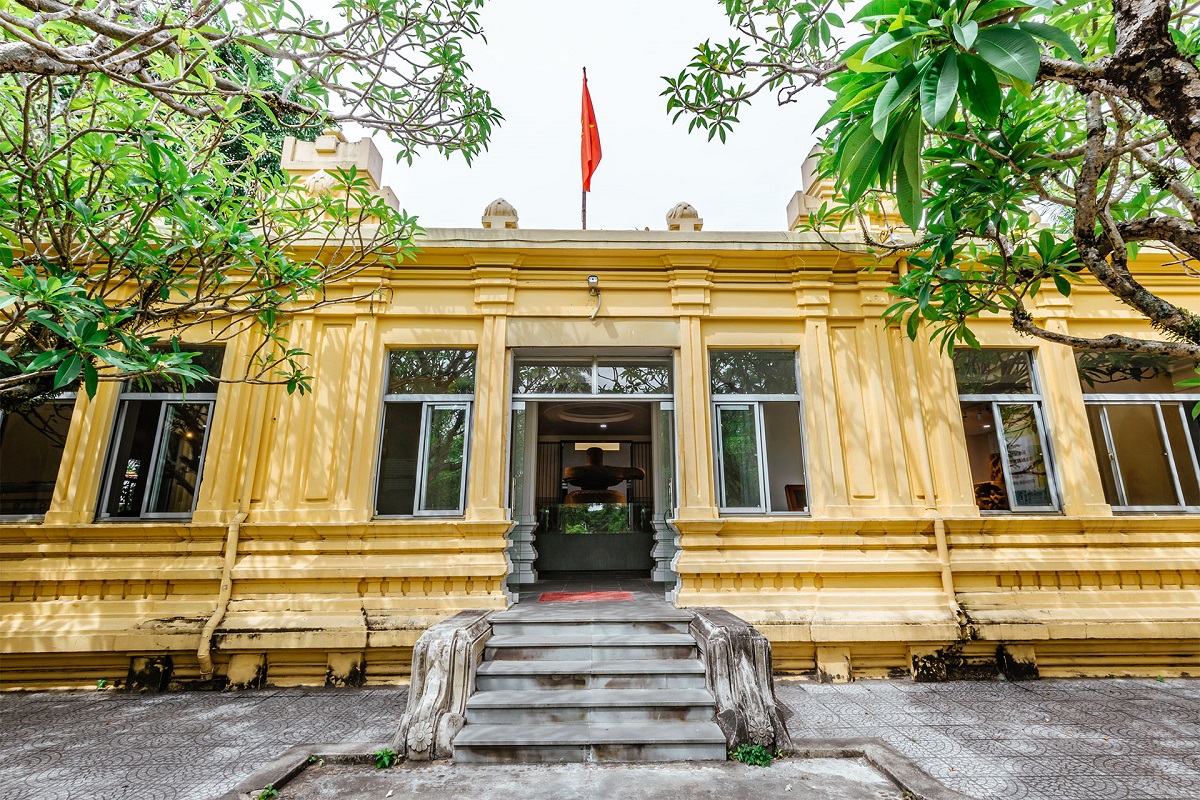 For a memorable and informative trip, the museum also offers you comprehensive services of audio guide and local guide.

Follow these 3 steps to explore the museum at your own pace.

For a group of 5 and above, you can hire a tour guide to listen to their commentaries in English, Vietnamese or French on highlighted objects or freely ask questions about the Cham history. Available during 7.30 am – 11 am and 2 pm – 5 pm

You need to book this service at least 3 days in advance if your group requires a French or English speaking guide.

The museum is one of the famous place in Da Nang with rich cultural and historical values, telling about the Champa Kingdom.

The original building was designed by two French architects, Delaval and Auclai. Based on the suggestion of Henri Parmentier, chairman of the Department of Archeology of the EFEO Institution, the architectural style of the museum is a blend between classical European Gothic design and Cham traditional art. 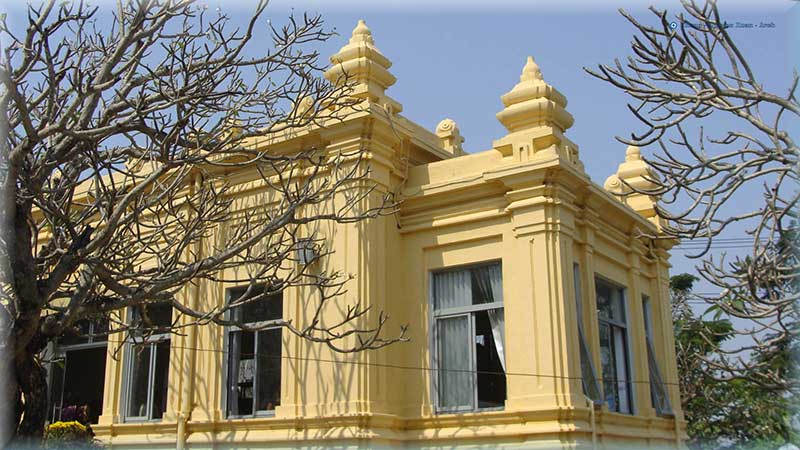 Influenced by the structure of Cham temples, Da Nang Museum of Cham Sculpture sits uniquely within the surroundings with its distinct pyramid-shaped roof. Moreover, large rooms filled with numerous windows expose the museum to exterior daylight. Although it has undergone few renovations, the original architectural features remain almost intact to this day, even after over 100 years.

Cham sculpture museum currently owns over 2,000 large and small antiques, of which about 500 are on display, the rest are carefully stored in the warehouse. These sculptures are mostly original, made on three materials of sandstone, terracotta, and bronze, in which sandstone statues are the most.

All statues and artifacts dating from the 7th to the 15th centuries reflect the cultural, spiritual, and religious life of the Champa people. Most of the statues depict the gods in Hinduism such as Siva, Naga snake god, Brahma, Vishnu, Laksmi, Linga – Yoni…It is not only unique in materials, but the objects at the museum also show the skillful talent of sculptural art in shape, content, and ideology. 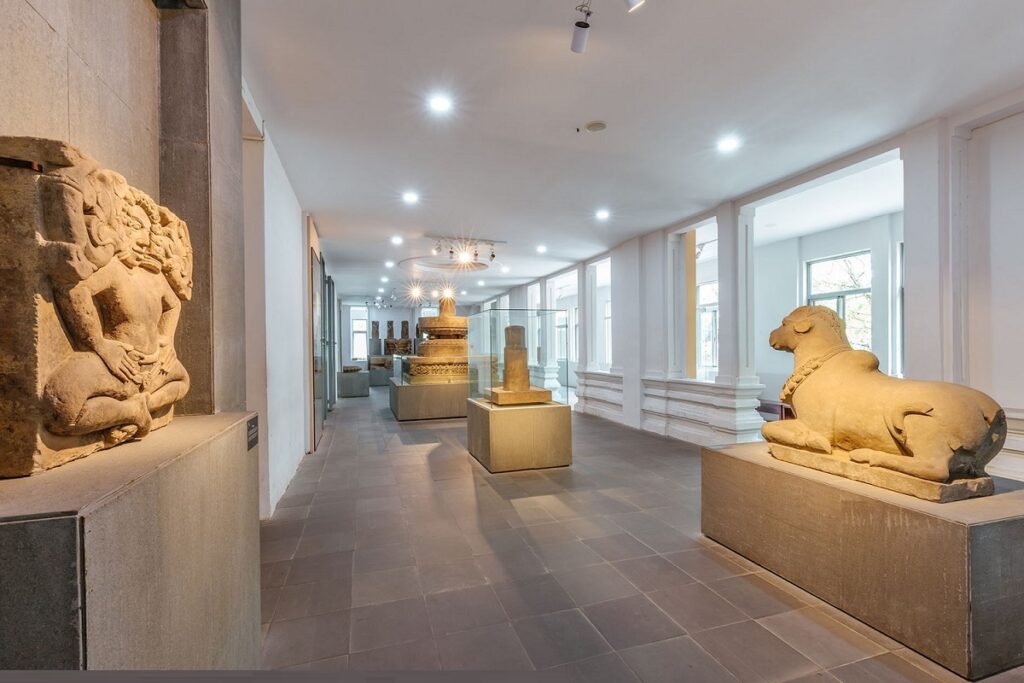 These artifacts are grouped into exhibition rooms according to the geographical areas where they were excavated such as Dong Duong, Tra Kieu, Thap Ma, My Son, Quang Nam, Da Nang, Quang Binh – Quang Tri – Thua Thien Hue, Quang Ngai, and Binh Dinh – Kon Tum. This division is easy for tourists to visit and easily recognize the unique features of Cham architecture in each locality.

Tra Kieu worshiping alter is an immortal masterpiece of Cham sculpture. The details are elaborately carved, meticulous to every millimeter. 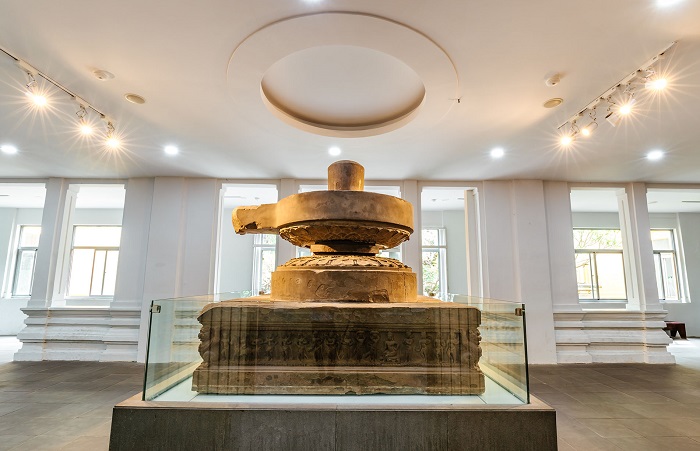 My Son and Dong Duong altars also have skillful carving statues on them, dating from the 7th – 9th centuries.

The statue of Bodhisattva Tara is the only bronze object of Cham Museum in Da Nang. With a height of 1,148m, the largest bronze statue has delicate carvings, exuding majesty and transcendent beauty. 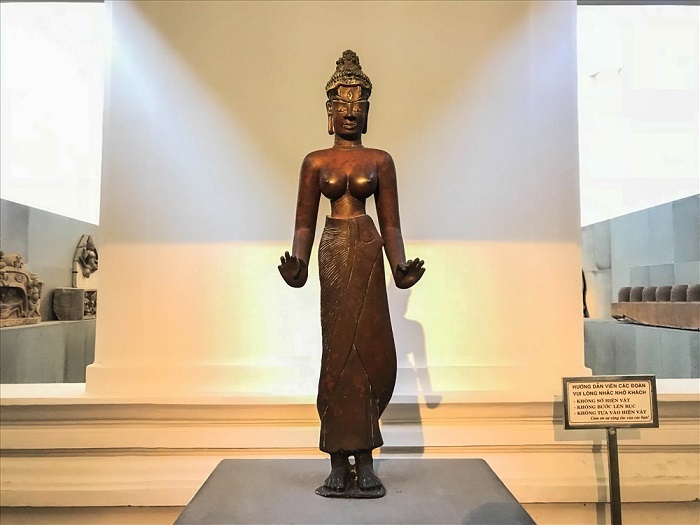 The standing Ganesha statue has an elephant head and human body with the age of the 7th to 8th centuries. 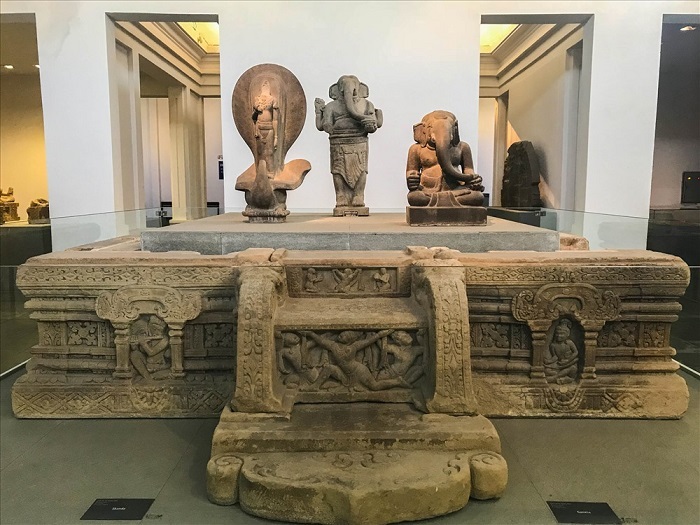 The Gajasimha statue also has an elephant head, but the body is a lion, showing the strong power of a holy animal, dated from the 7th – 8th centuries. 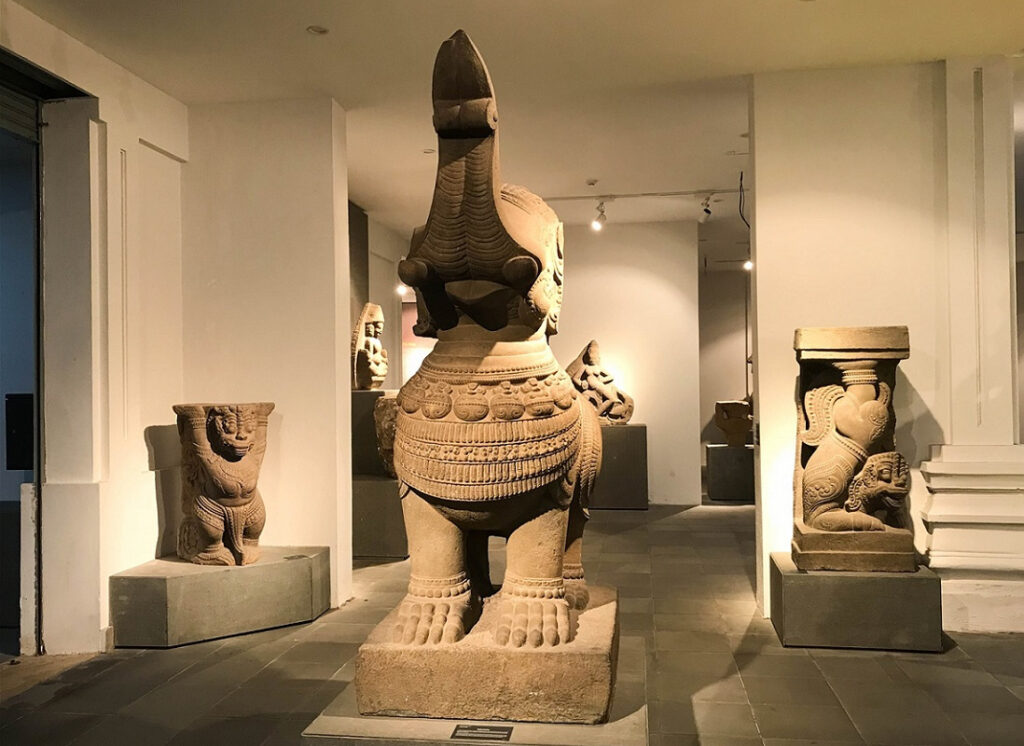 Simply beautiful sculptures from the Cham era (Người Chàm). This museum illustrates truly the rich and diverse cultural, ethnic and religious heritage of Vietnam. A must see for anyone interested in Vietnam’s heritage. I love this place.

This museum gave you insight into the cham culture with statues, relics from various temples, sanctuaries, etc. It was laid out well by the different excavations, periods of time, etc. There was so very much to see and observe. We enjoyed it very much and developed a appreciation for Cham peoples.

Ancient artifacts and statues recovered from My Son valley and ancient Hindu Temple sites. This is an amazing collection of beautiful pieces of carving and art. A must see.

Getting to Da Nang Museum of Cham Sculpture

Right opposite Vietnam Television Center, Museum of Cham Sculpture is located at the corner of Bach Dang street and Dragon Bridge, on the bank of Han River. You can easily get to the museum by taxi, private car, or motorbike. 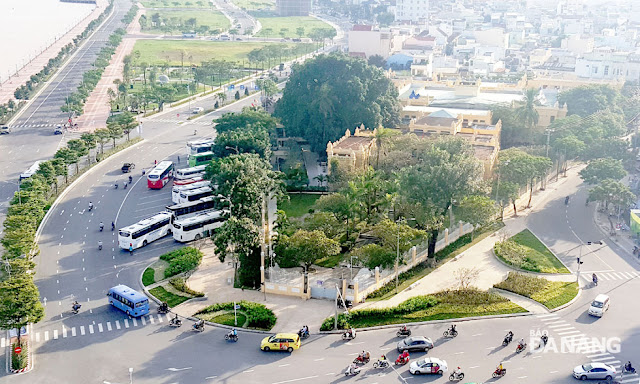 If you travel in a group, renting a private car charter for half a day or a day is an excellent idea. Alternatively, you can rent a scooter in Da Nang for just $4.5 a day. You can also join a Da Nang day trip and explore the city.

Notes when visiting the Cham museum

To visit this site, you should pay attention to the following things:

Museum of Cham Sculpture should definitely be on your must-come list when traveling to Da Nang. You will time-travel to a once-mighty nation and have the chance to grasp the stunning art masterpieces of Cham people.