Han river bridge is known as the first modern bridge designed by Vietnamese architects and local workers, also, the first swing bridge ever in Vietnam, which is hailed as a milestone of the city’s history. 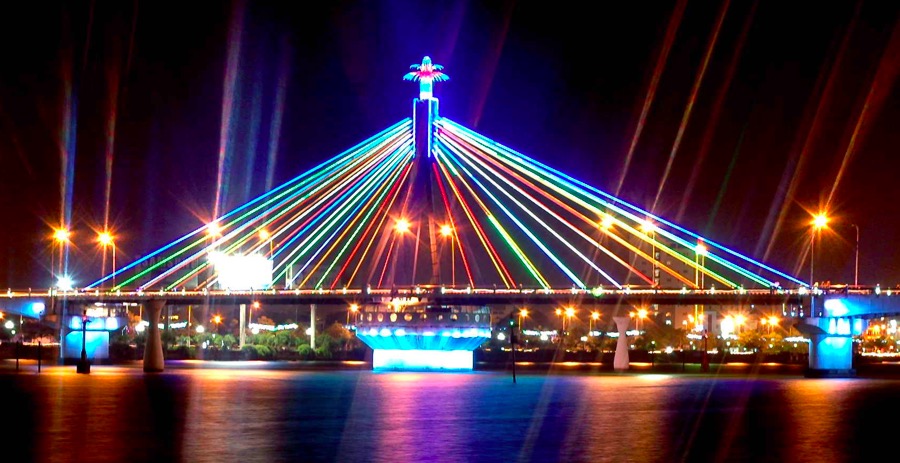 The origin of Han River bridge

After Vietnam’s government succeeded in rising up against the colonialists and gained independence, Nguyen Van Troi bridge was the one and only link between the city center to the adherent areas which were separated by Han river. Therefore, the municipal council proposed the idea of another bridge construction crossing Han river to fulfill their people’s needs. 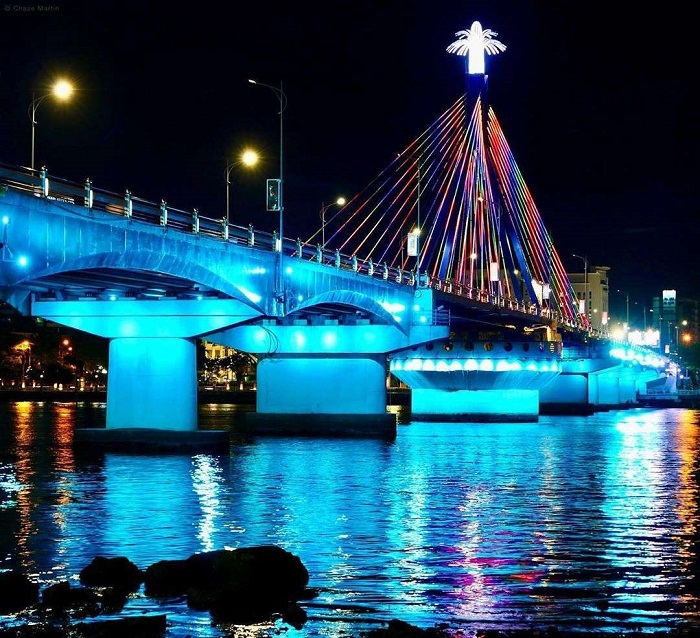 It was in 1998 Feb that they began the construction process; not until 2000 when the bridge was open for public use.

The architecture of Han River bridge

The Han River bridge rotates to serve the purpose of waterway traffic. This activity creates favorable conditions for boats to pass through. The reason why the bridge rotates is that the main shaft can move at an angle of 90 degrees. 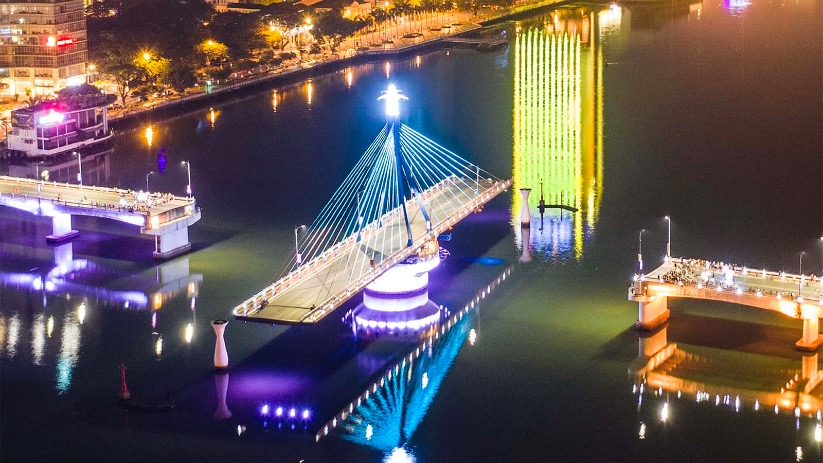 Formerly, the bridge swang during the early hours of the morning from 1 a.m. to 4 a.m. to support the river traffic and transportation so that large cruisers or maritime ships would go past without facing any obstacles. However, in order to boost tourism profit and local leisure activities, the city governors decided to extend the bridge swinging duration, making it available for more people to admire the scene from 11 p.m. to 12 a.m. on Saturday and Sunday.

The best place to watch the Han River bridge swing

There are many ways for you to admire the beauty of the Han River bridge at night. In particular, renting a boat to cruise along the Han river will be a worthy choice for you. At the same time, visiting a coffee shop also gives you the most complete view. 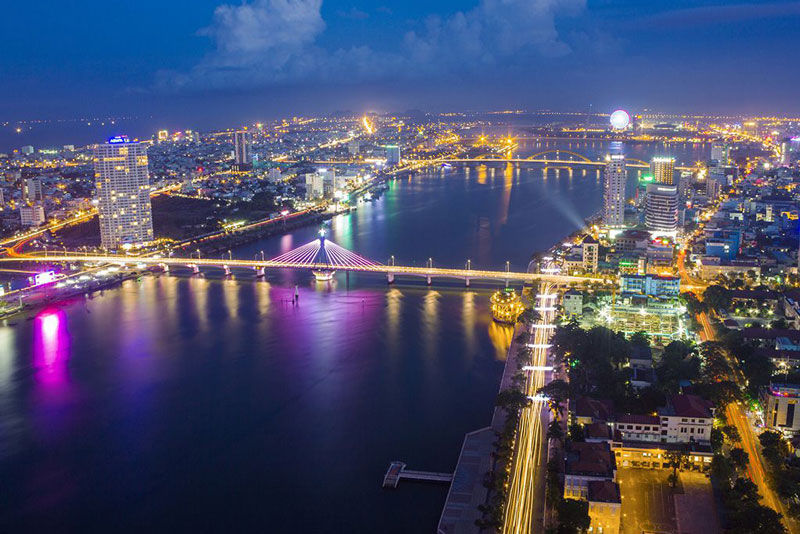 In addition, you should choose Da Nang hotels near the Han River bridge. Accordingly, you have recently got the ideal perspective on the Han Stream Scaffold, effectively catching the awesome snapshot of the extension.

In the early mornings, the beauty of the Han river in Da Nang is as gentle as a young woman’s. The streets were drunk in their sleep, leaving the Han river awake with the dim street lights. In the thin mist of sunshine, the river does not seem to drift, standing still and looking at the peaceful and peaceful beauty of the homeland. The river was calm as if it didn’t want to wake up the ships that were sleeping peacefully after a hard day. Only the waves lapped softly as if singing a soft song praising the beauty of the city. In the quiet space, the river is like beautiful silver silk. 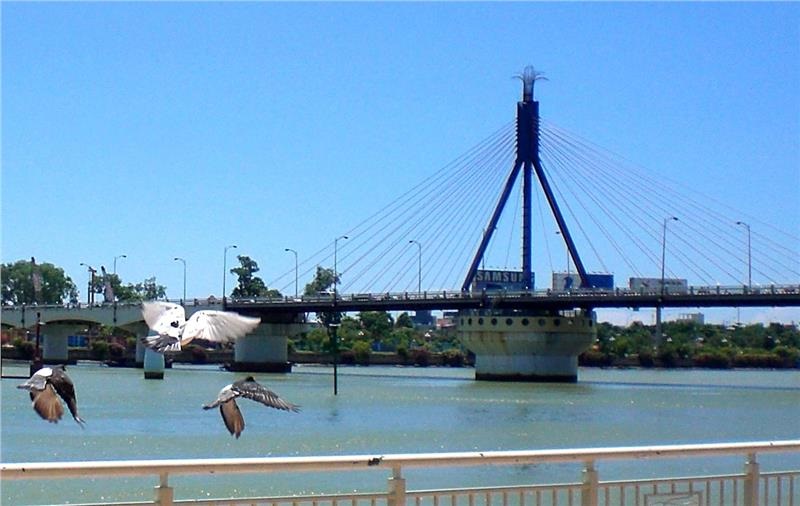 However, in the afternoon, when the sunset appeared. The river’s face becomes rosy, sparkling poetically. The river is like a giant mirror reflecting the great ocean ships. Here and there, the whistle to the port, the whistle to go to sea sounded. The river happily laughed, lapping the waves against the side of the boat, in harmony with the vibrant rhythm of the city. 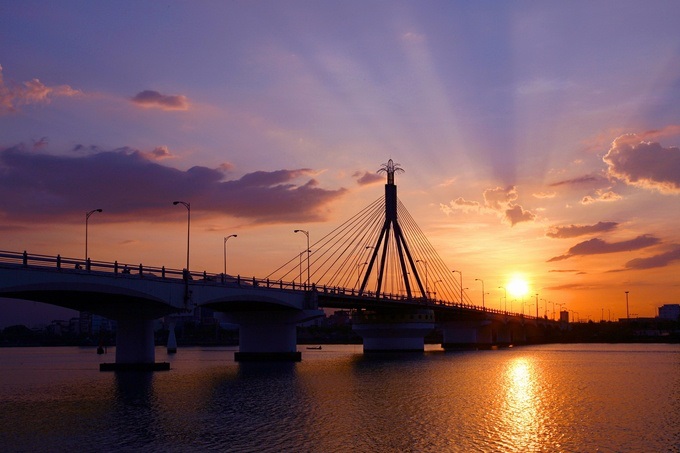 Han river and Da Nang City are inherently beautiful and poetic, becoming more beautiful every night. Leaving in the hearts of visitors an indelible impression. The Han river becomes quieter, the city lights up the river in a brilliant coat. The light from high-rise buildings, billboards, and high-pressure lampposts shines down on the river surface, shining brilliantly with many colorful arrays. The bridges have the opportunity to put on colorful shirts, brightening up a river. 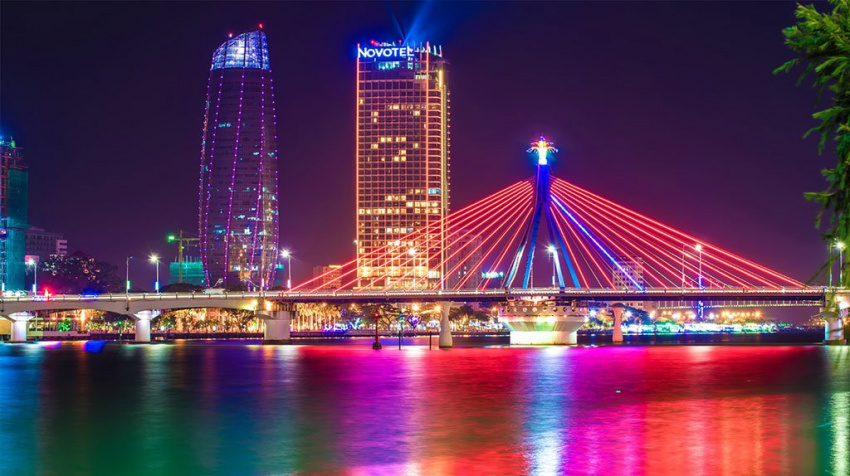 Cruise was great. Well worth it! Best on weekend night when dragon blows fire and water! Choose top deck for best view.

Great light show at night with changing colors and designs. Should be located in Las Vegas… absolutely eye catching!

Getting to Han River bridge

The suggested vehicles to come to Han River Bridge include motorbike, bike, car, taxi, cyclo. If you start from Hoi An, especially from the traffic light at An Bang Beach, turn left and keep going until you find Pham Van Dong Street on the left of you. From there, take that street, and you will arrive at Han River bridge after 45 minutes. Or, if you prefer to walk from Han Market, take Bach Dang Street. When you meet Indochina tower, turn left, then turn right to Le Duan Street, and turn right again to reach Han River bridge. Walking takes about 10-15 minutes. 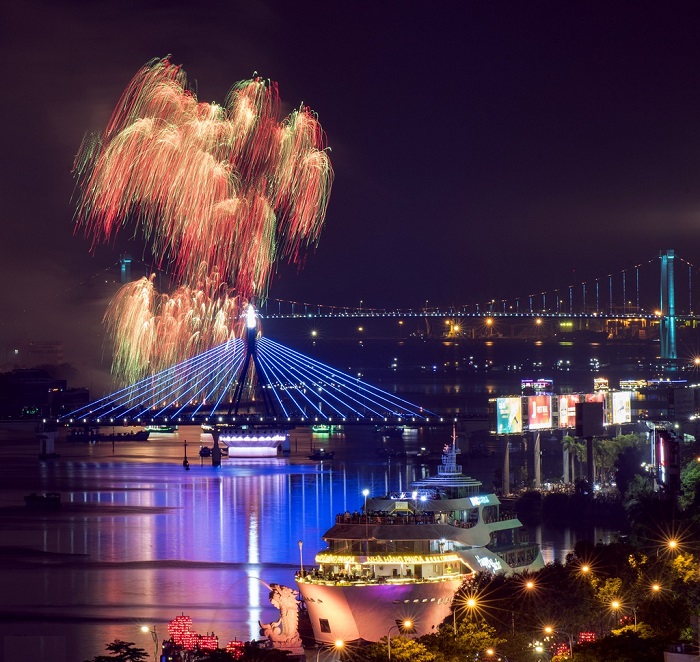 Built by the contribution of local people, Han River bridge holds a significant part in the citizens’ hearts. Nowadays, although there have been a lot of modern bridges built lately to connect the two sides of Han river, the position of Han River bridge is irreplaceable. There will never be a second bridge that leaves such special impression on tourists as this one.