The Marble Mountains of Da Nang

The Marble Mountains are one of central Vietnam’s most stunning and unique sights to see. The five mountains – made from marble as their name suggests – rise dramatically out of a flat plain just outside of Da Nang, looking almost impossibly out of place. The five natural Marble Mountains are each named for one of the five natural elements of Chinese feng shui: Fire, Plant, Soil, Water, and Metal, and are an important sacred site to Vietnamese Buddhists.

Blessed by nature, the Marble Mountains are wonderful to visit at any time of the year. The most beautiful season to experience these tropical coastal mountains, though, is summer (June – August). But be aware that you must climb many stairs, so breathable clothing and water is a must. You may want to avoid the stormy season (usually from September – November end) as the weather is more unpredictable and the stairs become dangerous when wet. You should make a day of visiting the Marble Mountains and then continue to Hoi An, to enjoy the beautiful beaches and fresh seafood for lunch. Wake up early and head to the Marble Mountains when there are few visitors and the air is still cool.

How to get to the Marble Mountains without a package tour

There are a few ways that a tourist visiting Da Nang can get to the Marble Mountains, which are about 20 minutes outside of the city, without taking a package tour. Here are some options:

What to see and do at the Marble Mountains

For generations the mountains were mined by local marble carvers who reside in the craftsman’s villages just below the hills. Nowadays, craftsmen mostly import their marble, and the five mountains have become something of a sacred site. Upon arriving, ignore all of the souvenir shops – you can buy anything much cheaper elsewhere – and head directly to the ticket office.

The entrance and ticket office is located at Thuy Son, the Water Mountain, the only mountain that is climbable. When you purchase a ticket (40,000d) , you have the option of buying an additional ticket to take the elevator up the mountain (20,000d) and a map (15,000d). Skip the elevator. Although the stairs up the mountain can be a bit steep, taking the elevator will cause you to miss some of the shrines and viewpoints along the way up. The map is worth every dong though. More than just a map, the thick booklet comes packed with information and history, as well as several postcards.

The mountain is dotted with hundreds of caves, shrines, statues, and pagodas. As you make your way up the first set of steps to the first landing, you’ll soon comet the first small Buddhist temple. Every sight and stop along the trail up the mountain is unique and well-worth a visit. 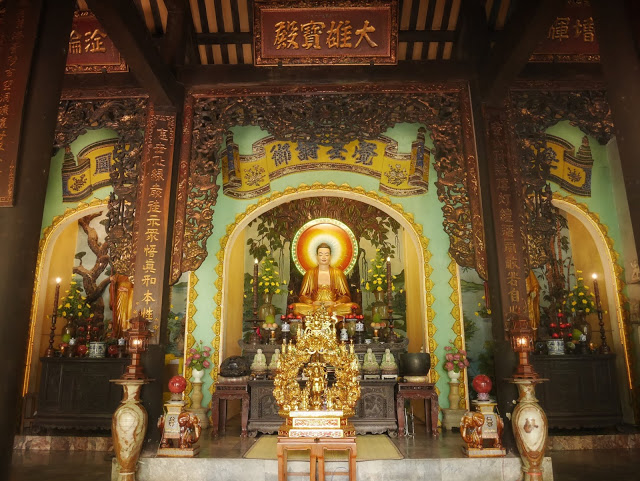 Marble Mountains and Da Nang during the Vietnam War

The Marble Mountains played an important role during the Vietnam War as well. Although located just adjacent to the Marble Mountains Air Facility, a United States Marine Corps Air Base, the mountains themselves were the location of a secret Vietcong field hospital. The Vietcong apparently thought so little of the US military that they didn’t even question setting up their secret base on the grounds of existing an American base. The US military, unfamiliar with jungle warfare and unaccustomed to the guerrilla tactics of the Vietcong, remained ignorant of the nearby base throughout the war.

Now, both bases are long gone, and the mountain is no longer a place of war, but a place of peace. It’s been re-dedicated as a sacred site to reclaim it from its violent past. Dozens of sacred Buddhist grottoes dot the mountainside, along with temples and statues of Buddha, Guanyin, Budai, and other Buddhist figures carved directly into the stone.

As you climb higher up the steep and sometimes slippery marble steps, occasionally the thick  jungle surrounding the path will clear, giving an unparalleled view of the breathtaking My Khe Beach nearby. If you are feeling really adventurous, head to the highest point on the mountain for an incredible view of the sea and surrounding landscape.

Cave Temples at the Marble Mountains

Some of the most beautiful and interesting sites on the Marble Mountains are the dozens of small cave temples and shrines that have been carved right into the side of the natural rock of the mountain.

The mountain’s biggest cavern is home to several small shrines. The air there is cool and damp, and thick with the fragrant smell of incense.

This cave is the spot on the mountain that feels the most sacred. While there are always plenty of tourists, there are many more local Buddhists who visit the cave to light incense and pray. It’s definitely a popular tourist site, but it’s still an important place for Vietnamese Buddhists as well.

If you get hungry or thirsty, there are a few vendors who have set up shop along the path on the mountain, but be warned. The vendors have to carry all of their wares up the mountain on foot, making them far more expensive than they would be back in Da Nang. It’s advised to bring your own bottle of water with you.

Guide to Visit the Golden Bridge Like a Pro