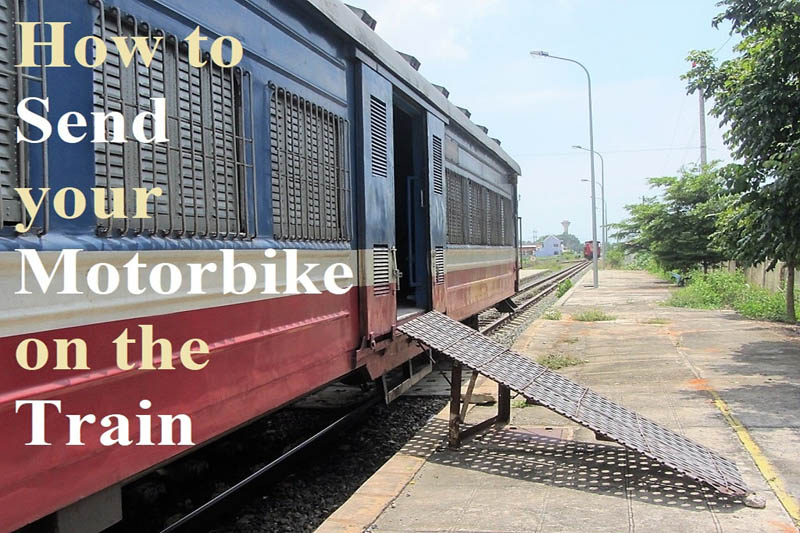 Putting your motorbike on the train is very convenient for road-trippers in Vietnam. For example, you can use this service to help you get out of the big, busy cities, such as Saigon and Hanoi, and into the countryside (or at least to smaller cities). This way, you don’t have to negotiate the awful traffic and pollution of the industrial suburbs. Or you can use it to skip large sections of a route. For example, many people want to ride from Saigon to Hanoi routes but don’t have enough time to do it all: you can put your motorbike on the train to either join a route somewhere further up the coast or to finish a route early and send your motorbike the rest of the way. You can send your motorbike to all major coastal cities between, and including, Saigon and Hanoi (Phan Thiet [Muong Man/Binh Thuan station], Nha Trang, Quy Nhon [Dieu Tri station], Danang, Hue, Dong Hoi, Vinh and Haiphong, from south to north respectively) and one inland destination, Lao Cai (for Sapa; from Hanoi only). See the map of major train stations in Vietnam above.

There are a couple of drawbacks to be aware of, but these shouldn’t be a problem as long as you make allowances for them and organize your road trip accordingly:

Step 1: Ride your motorbike to the train station. Generally, opening hours for sending your motorbike (and picking it up at the other end) are between 7am and 5pm, although it’s quite likely (especially in smaller cities) that workers take a lunch break from 11.30am to 1.30pm. (Note:remember that you must send your motorbike on the train at least a couple of days before you want to pick it up again at its destination).

Step 2: There are at least a handful of different companies handling freight (including motorbikes) on the main south-north line. However, by far the most reliable company I’ve used is Door to Door. At Saigon and Hanoi train stations find or ask for the Door to Door office (in Vietnamese: Công Ty Bao Bì Vận Chuyển). At Saigon train station their office is located to the left outside the main station entrance at 1 Nguyen Thong Street. At Hanoi train station the office is located in a little kiosk to the left of the main station entrance (120 Le Duan Street). At other stations between Saigon and Hanoi there may or may not be a dedicated Door to Door office. If there isn’t one, find or ask for the hành lý (freight) office. This is usually just to the side of the main ticket office at all the main stations marked on the map.

Step 3: If possible, try to find a woman behind a desk, next to a computer. (In general, it is the women who deal with the transaction and the blue-overalled men who deal with the practical side of things: packing and wrapping the motorbikes. From travellers experience, the women are much easier to deal with than the men, and much more likely to do it all by the book, rather than trying to squeeze some ‘extra charges’ out of you.) If you don’t speak any Vietnamese the process should still be straightforward, and some staff know enough English to be able to communicate. Point to your bike and say the destination you want it to be sent to. The staff will show you a laminated list of stations, motorbike types, and prices. It’s very clear and the prices are fixed. (Note: a standard 50,000vnd [$2] handling fee is paid separately to staff when you collect your motorbike at its destination station.) Once you’ve established where you want the motorbike sent to and how much it will cost, it’s best to get an idea of how long it will take for the motorbike to arrive at its destination. Again, if you don’t speak Vietnamese, this should still be easily done by pointing to today’s date on a calendar and then pointing to a date a couple days in the future and saying ‘Yes?’. (Note:although some major destinations, such as Quy Nhon (Dieu Tri) and Dong Hoi, are not listed, it is possible to send your motorbike to them, so persist, or just use one of the other freight companies instead).

Read more: Da Nang To Hue Train – The Most Famous Route in Vietnam

Step 4: Apart from your motorbike and some cash, you will need to have three things with you to successfully send your motorbike on the train: your passport, motorbike blue/green card (the ownership card with your/previous owner’s name and address on it), and a phone number. In some cases, you may also need to give an address in Vietnam: you can put anything for this, like your hotel address, for example. Once the staff have taken note of all your paperwork, you pay the amount in full (except the 50,000vnd handling fee). You will receive a receipt with your name, phone number, motorbike model, and destination on it. Do not lose this receipt. If you do, you may find it very difficult to claim your motorbike back again at the destination station. Also, remember to take your blue/green ownership card with you (don’t leave it in the motorbike trunk, for example).

Step 5: While you are completing the transaction, your motorbike will most likely be undergoing some changes needed for travelling as freight. The wing mirrors are unscrewed and stored in the trunk under your seat; all the gas is siphoned from your tank (make sure you don’t fill-up just before going to the station); and the motorbike is checked for any markings, flaws, or breakages so that the freight company is not held responsible for any of these on the other end. (Note:do not leave anything valuable in your motorbike trunk, and remember the take your keys with you – don’t accidentally leave them in the ignition.) Then your motorbike goes through the process of ‘mummification’. Vietnam’s railroads are surprisingly bumpy so, to reduce the chances of damages occurring during the journey, your motorbike is covered in protective layers: cloth, blankets, bubble wrap, plastic bags, padding, foam, cardboard and, lastly, an exoskeleton made of wooden planks. Safe and secure, your motorbike disappears behind the scenes with all the other freight, awaiting the locomotive that will transport it up or down the country to its destination.

Step 6: Now your motorbike is on its way, and it should have been a pretty painless process. All you have to do is get to your destination to pick up your motorbike. If you’re travelling by train, the Door to Door office at Saigon station (and Hanoi too) also sells passenger train tickets. This is really convenient as it means you don’t have to queue up in the main station hall to buy your ticket.

Step 7: When your motorbike arrives at its destination you should receive a call or text from the station. (If you don’t hear from them after a few days, assume they’ve forgotten and head down to the station anyway, because in some cases you will have to pay 10,000vnd for each day that your motorbike is waiting to be picked up at its destination station.) At the station, find or ask for the hành lý (freight) department and show the staff your receipt. They will check your information with their books, find your motorbike, unwrap it, put the mirrors back on and hand it over to you. Pay the 50,000vnd handling fee, give your motorbike a good check-over – brakes, tyres, frame, trunk, mirrors – and you’re good to go. Except you’re not, because you won’t have any gas in your tank. Ask the staff for the nearest gas station (trạm xăng). You may have to walk your bike there, although some bikes seem to somehow be able to run on fumes for the minute it takes to get as far as the gas pumps. Now you have your motorbike, a full tank of gas, and a great Vietnam road trip ahead of you. (Note:if for any reason there’s a problem identifying or authenticating your motorbike, show your blue/green ownership card to the staff, so that there’s no disputing it’s your motorbike).

Guide to Visit the Marble Mountains Without a Package Tour

A Complete Guide to Bana Hills