The Dragon bridge is one of the most iconic architectural sites in Da Nang. It is worth a visit to admire the unique beauty at night, soak up the pleasant atmosphere, and behold the fire and water show that can be found nowhere in Vietnam. 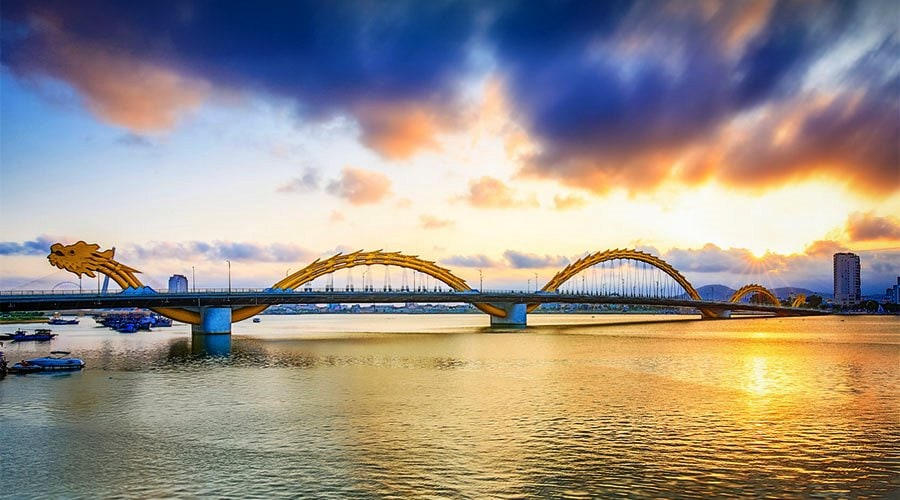 The brief of Dragon bridge

Dragon bridge was constructed over the Han river in July 2009. But not until March 2013 was the bridge open to traffic.

Dragon bridge is 666 meters long and 37,5 meters in width and equipped with a lighting system of total 15,000 LED lights. It carries a six-lane road, connecting Da Nang international airport to My Khe beach and Non Nuoc beach with thousands of vehicles everyday. Its dragon on the median strip is its highlight, becoming the heaviest dragon architecture all over the globe. 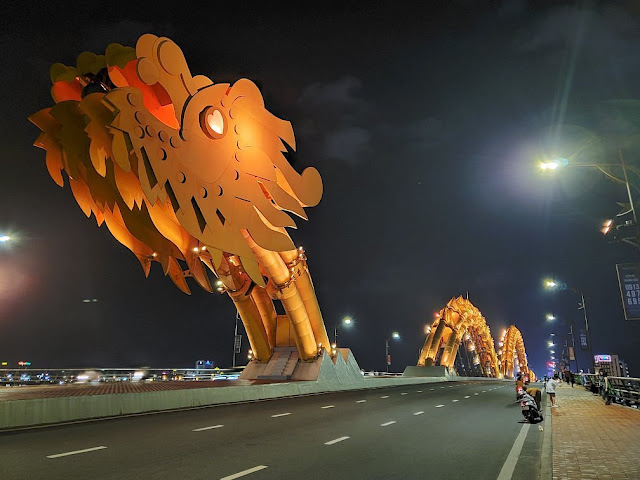 The distinct structure of Dragon bridge

Dragon Bridge, with the shape modeling a majestic dragon of the Ly Dynasty flying to the East Sea, is one of the most iconic architectures in Da Nang.

Five main spans of the bridge support a steel dragon, featuring a length of 586 meters and weight of 9,000 tons. Its color is yellow, and according to the Five elements theory, yellow symbolizes prosperity and the future. 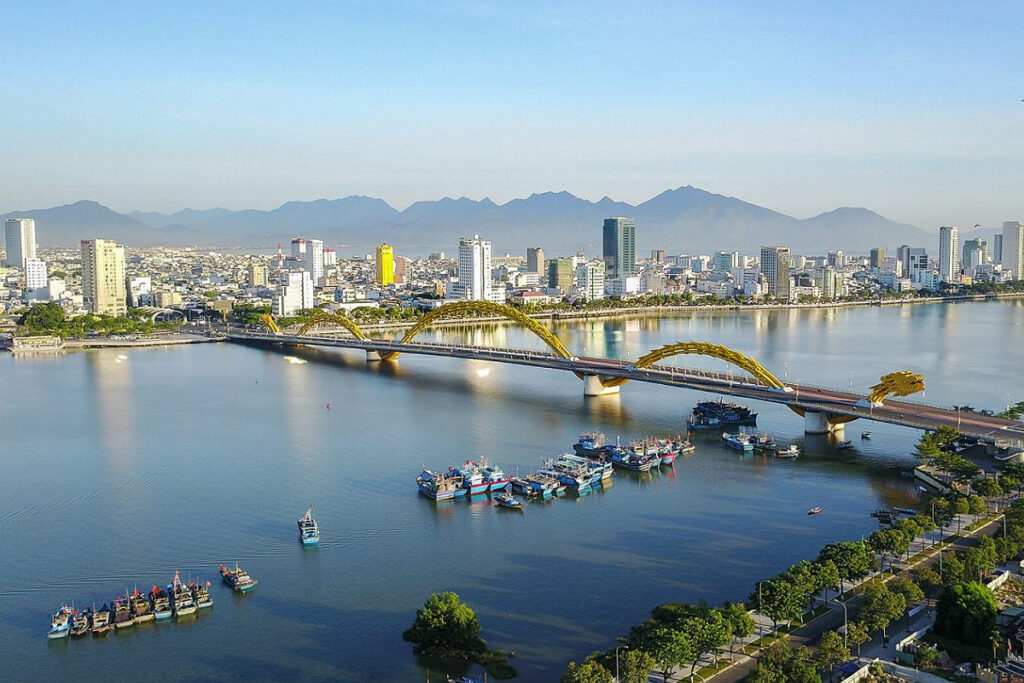 The head of the dragon faces the East, with heart-shaped eyes and with an open mouth. Dragon’s tail is stylized with the design of a blooming lotus flower, the traditional flower of the idyllic Vietnamese countryside. The undulating dragon’s body reaching the sea shows the ambition of Da Nang to integrate with friends all around the world. 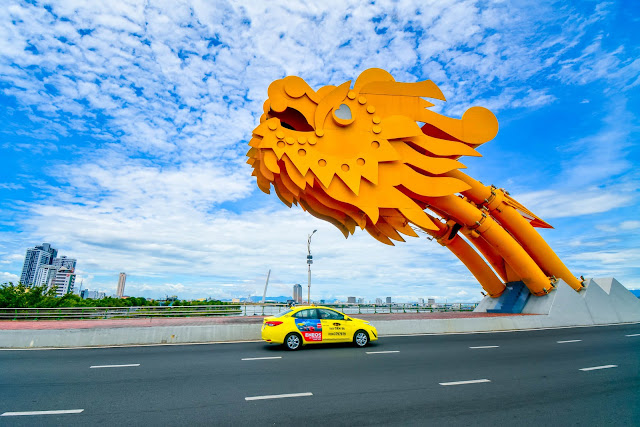 In terms of stability, 5 coating layers will prevent the bridge from corrosion and impacts of weather as well as bring the eye-catching golden color for the bridge.

The best place to enjoy the Dragon fire show

Watching the fire-breathing performance of Dragon bridge is one of the most exciting moments. Fortunately, you can easily witness fantastic performances during the weekend without paying a penny. Regularly, at 9 o’clock on Saturday and Sunday nights, Dragon bridge will provide residents and tourists with fantastic fire and water performance. 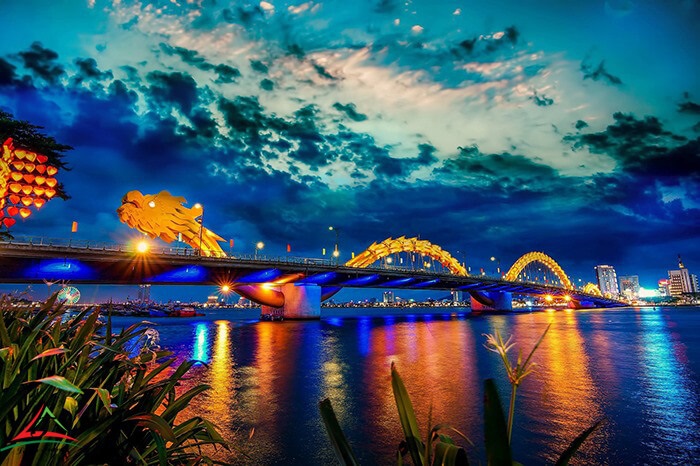 Imagine you are waiting for the fire breathing show, joining in the electrifying atmosphere and seeing the reflection of thousands of twinkling LED lights of the bridge on the Han river before your eyes, surely you would not want such experience to be disturbed. Therefore, it is important to pick an observing point in advance to have the best experience watching the Dragon bridge fire show. 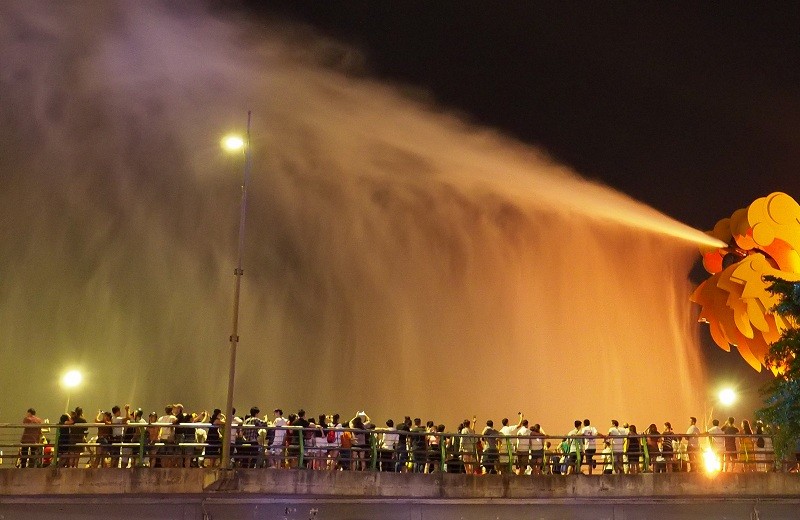 When the show starts, vehicles are not allowed to pass the bridge. Since then, you can enjoy the performance right on the bridge. However, you should stay away from the dragon’s head, or else you might get wet during the water-breathing show. 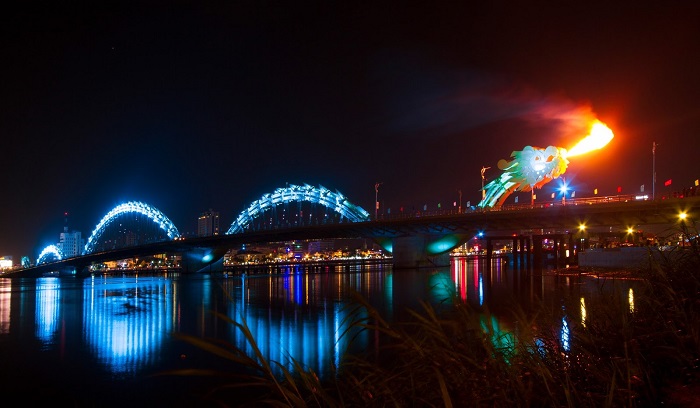 Tran Hung Dao street crosses the Dragon bridge right under the dragon’s head so it is the best place to enjoy the performance. There are many sidewalk drink stalls along the street so you can simply take a plastic chair, enjoy local drinks while witnessing the spectacular performances. Love bridge and Riverside park located along Tran Hung Dao street are the best spots to take good views of the show.

From hotels and rooftop bars

A more exciting place to see the performance is from hotels and the rooftop bars near the bridge. From these positions, you can enjoy both the performance and the poetic beauty of the Han river. 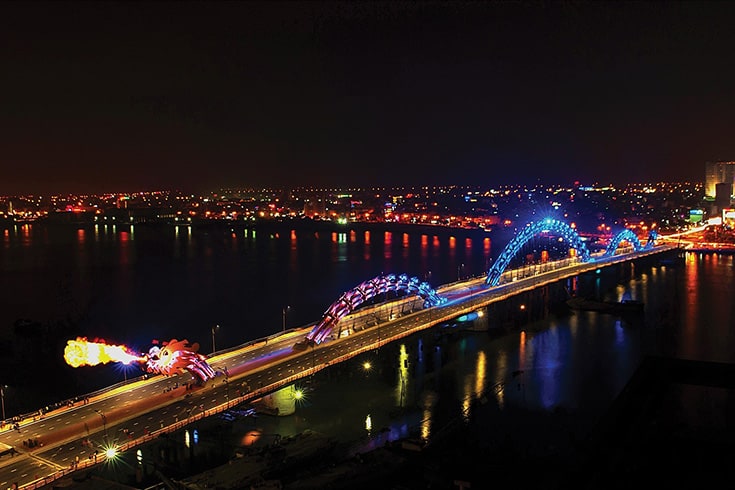 Other famous bridges over the Han river such as Han River bridge or Tran Thi Ly bridge also are not-too-bad options. Dragon bridge lies in between these two bridges and parallel with them, you can see the water and fire performance from one of two bridges. 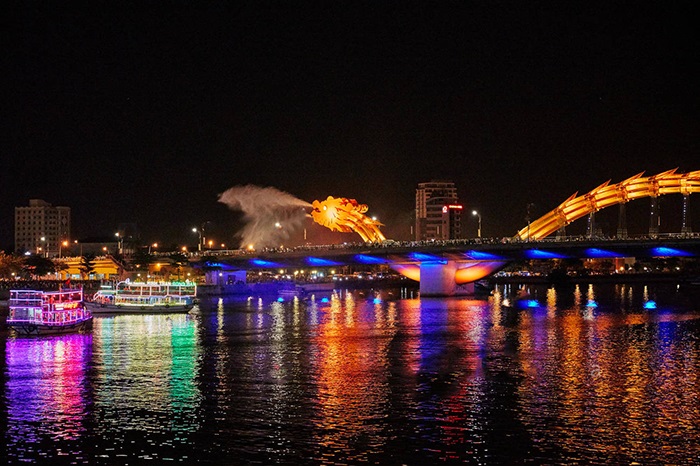 Many Han river cruises anchor at the pier near the Bach Dang street, run along Han river and pass by Dragon bridge. Therefore, you take the cruise to watch the show at weekend.

My son and I have come down both nights of the weekend to enjoy this event. The bridge is closed a few minutes before 9pm and the Fire Blasts begin promptly. They are blasts every few minutes, and followed up by water blasts that convert to steam. All the locals still come to enjoy it as well. Food and drink is available. The Night Market was still working on the Beach side of the river. Getting a taxi home was bedlam in the first few minutes after the show finished (15 mins) so we walked home.

We went for a drink in one of the rooftops clubs just to see the dragon bridge by night and Everything stops just to let this spectacle to happen and it was worth it really. Definitely something never seen before to must experience if you visit the beautiful city of Da Nang

I can say this bridge was my favourite due my travel in Vietnam, specially every Saturday night when the fire dazzled every single person in Da Nang.

Getting to Dragon bridge

Actually, it is really easy to reach the Dragon bridge if you are in Da Nang, Hoi An or Hue. Just ask everyone you meet about Dragon bridge, which is “Cầu Rồng” in Vietnamese, or simply type its name on your own phone’s Google Maps. The bridge is across Han river from Nguyen Van Linh street (Hai Chau district) to Vo Van Kiet street (Son Tra district). It is only about 2km from My Khe beach, or 5km from Da Nang international airport. 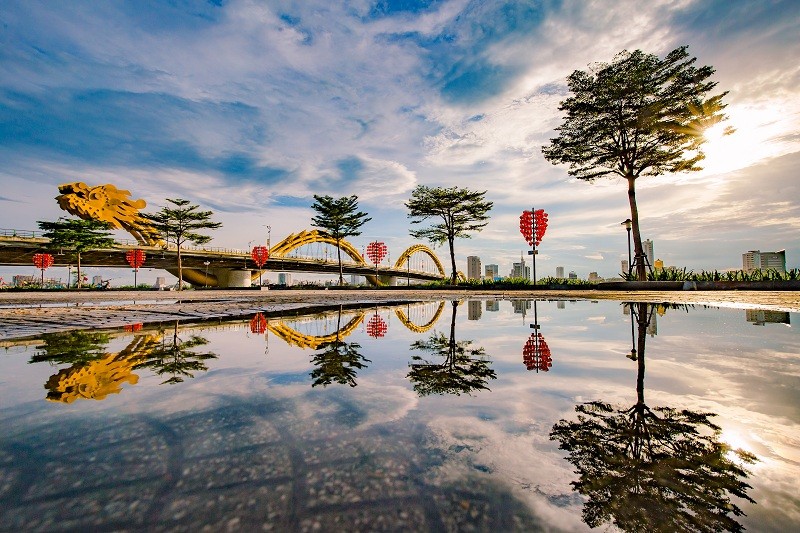 You can visit Dragon bridge during day time, but night is the best time to see it because of a dazzling light effect. The nearby is cozy, vibrant Son Tra night market, where you’ll find lots of souvenirs, foods and drinks.