The Vietnamese city of Da Nang lies on the coast and is one of the country’s largest conurbations. Da Nang city has International Airport with many direct flights, deep sea port and the national North – South railway system of Vietnam. The inner city traffic system has been renovated and upgraded to create a new look for Da Nang.

Often overlooked by tourists and favoured more by businessmen, Da Nang lacks the bustle of Ho Chi Minh City and the charm of Hanoi, but is close to a number of the most famous Vietnam historic, heritage and natural sites, and has some interesting aspects of its own.

Most travellers who are staying in Da Nang for a few days or more will want to check out the region’s white-sandy beaches and coastline, which provide a very different kind of resort-style Vietnam. The Da Nang Beaches is highly suitable for swimming and never cold and innumerable water sports are available at the principal beaches, such as diving, snorkelling and water-skiing. The most popular nearby stretches include Bac My An Beach, Nam O Beach, Non Nuoc Beach and especially My Khe Beach was voted one of the most beautiful beaches by Forbes (U.S.), each of which has an undeniable tropical flavour. 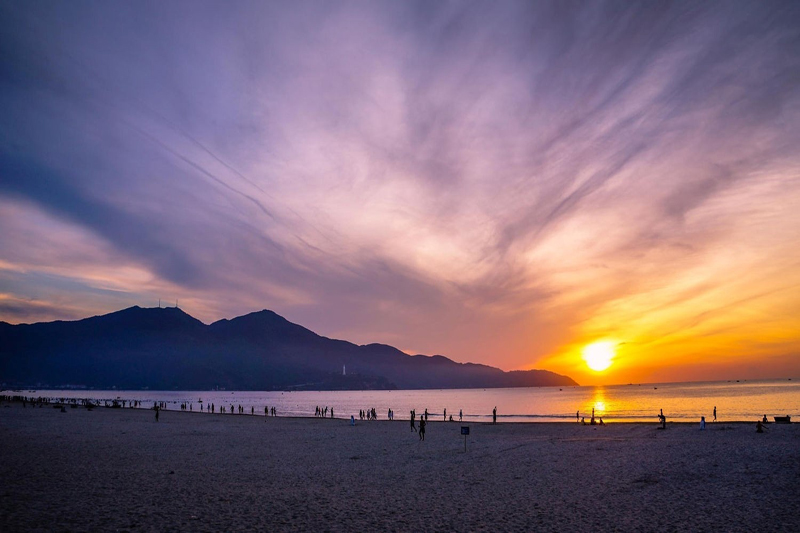 As a result of the Vietnam War conflict, many of the most obvious aspects of Da Nang’s heritage are no longer around, meaning that those still standing are now more revered. The Da Nang Cathedral is one such tourist attraction and its distinctive pink architecture dates back to the 1920s. Other historic sights to see in Da Nang include the rather gaudy Cao Dai Temple, the very traditional Phap Lam Pagoda, and the Pho Da Nang Pagoda, where three renowned images of Buddha reside.

The backdrop provided by the Marble Mountains (Ngu Hanh Son) is quite a sight and comprises no less than five mountains of differing heights, named after the elements – Earth (Tho Son), Fire (Hoa Son), Metal (Kim Son), Water (Thuy Son) and Wood (Moc Son). These mountains feature elaborate pagodas, Buddhist temples and lengthy tunnels, while the foothills have seen the arrival of Stone Villages and settlements, specialising in marble sculpture. Although the Marble Mountains are undeniably the principal landmark around Da Nang, there are a series of man-made offerings that deserve some attention, namely the 17th-century Long Thu Pagoda, the early 19th-century Dien Hai Fortress and the ancient Iphanho Cemetery. 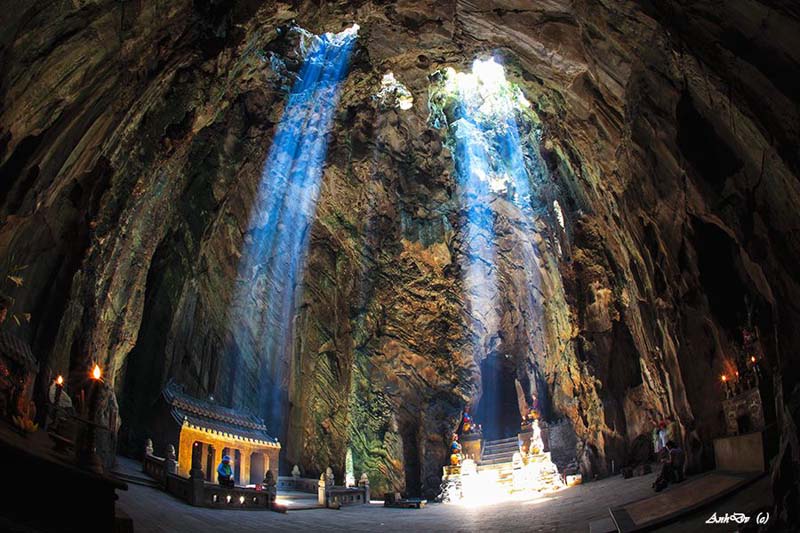 Most will be pleasantly surprised by the variety of cultural attractions now present in Da Nang, often recounting its bygone days with artefacts and information about former communities. The Da Nang Museum of Cham Sculpture is highly regarded throughout Vietnam for its wealth of important Hindu artefacts and Cham sculptures originating from the Indic kingdom of Champa. At the Da Nang Museum you can expect exhibits relating to the French and American wars, as well as more traditional relics. The military days are also remembered at the Ho Chi Minh Museum.

The central location of Da Nang really does lend itself to day trips and tourists on holiday here frequently choose to take excursions to the surrounding towns. Amongst the closest of these attractions is the Bana Hills within the Truong Son Range (or the Annamite Range), where the refreshingly cool climate and spectacular coastal views provide much appeal to travellers. Nearly Bana Hills, Hai Van Pass, shaped by this ideal geographical feature is praised ‘The most marvelous scenery of all’ for having an amazing view overlooking the sea, besides the notorious dangerous curves. To the south of Da Nang, Cham Island is a great place for sunbathing and snorkelling, being part of the Cu Lao Cham Marine Park and well connected by boats from the port. Also close is the Bach Ma National Park and its wealth of birdlife, Son Tra Peninsula (Ban Dao Son Tra) and its neighbouring Tien Sa Beach, the Hindu temples of My Son, the huge citadel of Hue, and the charming town of Hoi An, a World Heritage Site with ancient architecture, winding old streets, numerous museums and a 16th-century bridge.

A fun and welcoming environment

Not only blessed by countless beautiful sceneries, Da Nang is said to be ‘Worth Living’ due to its refreshing and peaceful environment. Used to lead the country in terms of economic advancement, Da Nang at the same time keeps its safety and security level under control, resolves states of homelessness and vagabonds, does away with drugs and reduces traffic jams to minimal degree.

Therefore, you can rest assured and tour the city in the most comfortable and mind-easing position. Coming to Da Nang, you will satisfy their appetite with countless local specialties such as My Quang (Quang’s Noodles), Banh Trang Cuon Thit Heo (Sliced Pork Rolled With Rice Paper), Banh Xeo (Pancake), Hai San (Seafood),… in over 150 high quality and standard restaurants.

Maps and orientation of the city

Unlike Hanoi or HCMC, the places of interest in Da Nang are scattered around the whole city outstretching miles in all directions. For that reason, going from one attraction to another on foot is a heavy chore, so you should use motorized transportation. Nevertheless, crossing the streets in Da Nang is pleasurable and you can closely observe your neighborhood at a slower pace. There are three main areas in Da Nang: Thanh Khe, Hai Chau, and Son Tra. Each area has its own distinctive features.

Here is the most local living quarters with the highest population density. The district is surrounded by the most markets, supermarkets, and electronic stores in Da Nang. Also, Thanh Khe is the transportation hub of the city, containing the main bus station, the train station, and it’s close to the airport. Apart from a single solitary beach and a peaceful, local feeling, there aren’t any tourist attractions in the area. Thanh Khe is a perfect getaway for those who are truly looking for a real local atmosphere, you can just walk around and explore the alleys, seeking the hidden cultural charm.

This is the heart of Da Nang, with all the conveniences that you need. It is the commercial, cultural, administrative, and educational center of the city as well. The international airport is here and the transportation infrastructure is fully-developed as well. Hai Chau District represents the soul of Da Nang, a top-notch, multicultural, and dynamic city with many restaurants, coffee shops, bars, shopping malls, skyscraping buildings, and fancy hotels. There are lots of points of interest for you to experience: the magnificent architecture of the seven bridges, the Sun World Da Nang Wonders with the famous “Sun Wheel” – Ferris wheel, the Da Nang Museum of Cham Sculpture with timeless artifacts, and the poetic along-the-river walkway – the Bach Dang Street – where you can watch local youngsters performing sports, arts, and music at night. So, if you are looking for a young and active all-you-can-get neighborhood with fantastic nightlife surroundings, then the Hai Chau district is truly for you.

There are located in the eastern bank of the Han River, are the paradise sectors of Da Nang with the sun, the wind, the golden sand, and a blooming mountain. Sea activities, cycling along the beaches or hitch-hiking through the monkey jungle, you get it all. This area features one of the best holiday experiences in Vietnam. What would your day look like, staying in Son Tra or Ngu Hanh Son district? Start by jogging in the early morning along lines of palm trees by the beach, observing the local fisherman bringing in their catch. Then have a nice day under the shining sun. When the sun gives way to dusk, you can relax at a nice café or a restaurant that caught your interest and fill yourself with the amazing cuisine of the central coast of Vietnam. Everything is at your leisure, no hassle and just a few steps away from your stay – restaurants, bars, cafes, and even parks are there all for you. Staying in the Son Tra and Ngu Hanh Son district is going to bring you a comfortable feeling of a chill-out vacation in a home away from home. 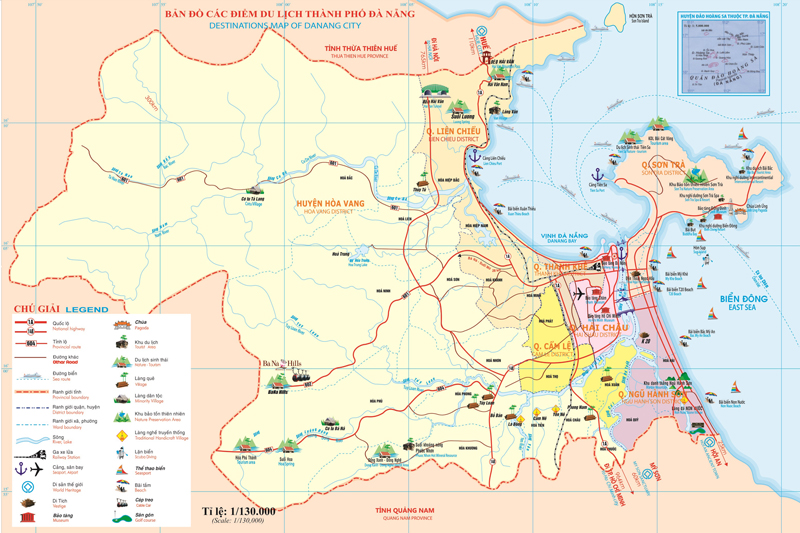