Da Nang railway station is one of Central Vietnam’s main train stations along the historic North-South “Reunification Line”. The railway station not only takes the role of transport the passengers to and leave Da Nang city but also it is the key to develop the economy and society of central Vietnam. 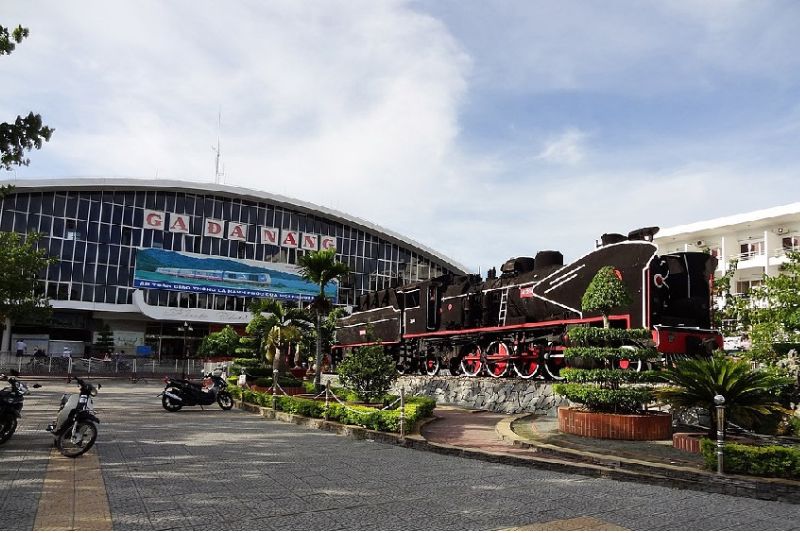 Da Nang Railway Station was built in 1902 and is an important part of Vietnam’s historic North-South Railway Line. The total length of the railway from Ha Noi to Sai Gon is 1,726 kilometers, and it took 34 years to complete the whole route.

In 1955-1956, to solve this problem and also to permit the planned expansion of Da Nang Air Base, the South Vietnamese railway company Hỏa Xa Việt Nam (HXVN) built the “déviation de Phông Lê” west of the city centre alongside National Highway 1.

Part of the old line was then repurposed as a freight branch across the Han River to the Tien Sa Port area. 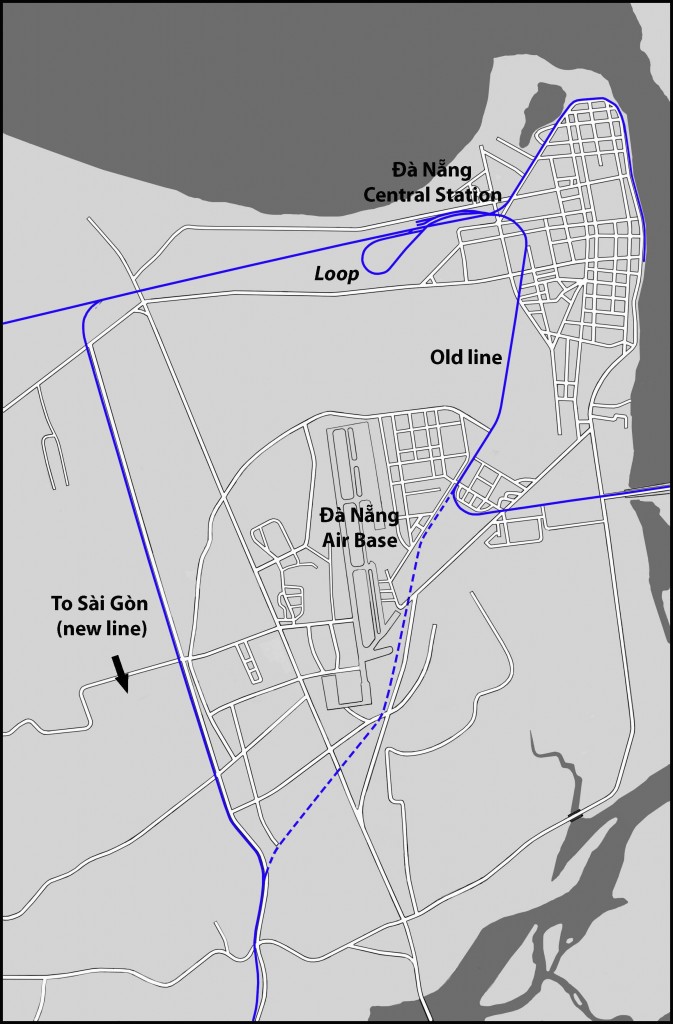 However, the building of the new line created a new problem – passenger trains now had to enter and leave Da Nang railway station via the same section of track, turning it into a terminus. In the absence of a turntable, a loop then had to be built to turn steam locomotives around before they could continue their journey. 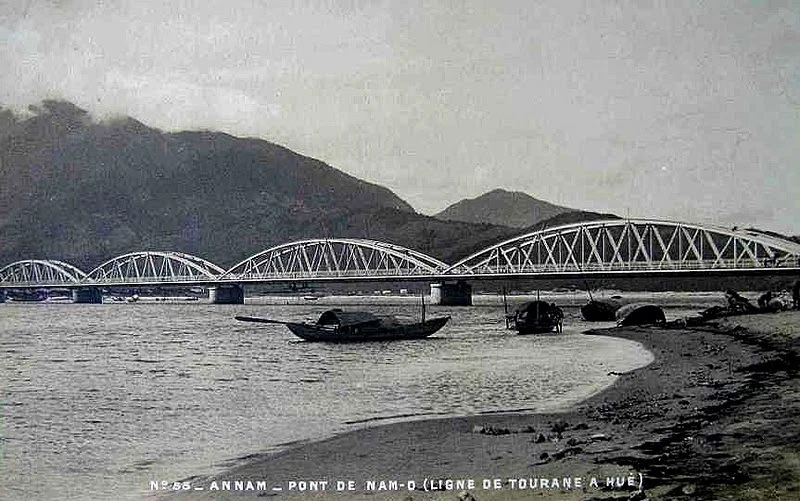 Today the loop line remains intact, although according to Vietnam railway officials it has not been used since the early 1990s. 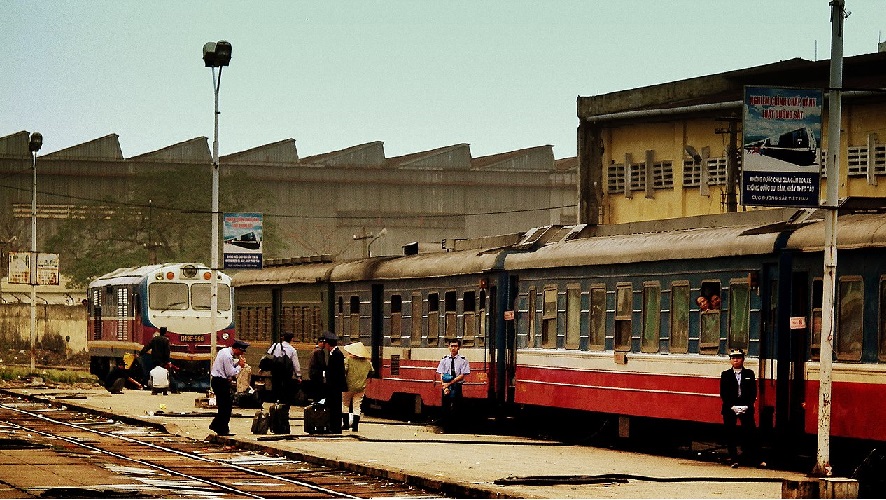 The station is located almost in the heart of Da Nang. Actually, it is not hard to find it, the main entrance of the station is at No. 200 Hai Phong street. Getting to this address, you will see a vintage steam train’s engine, a special icon of the Da Nang railway station. 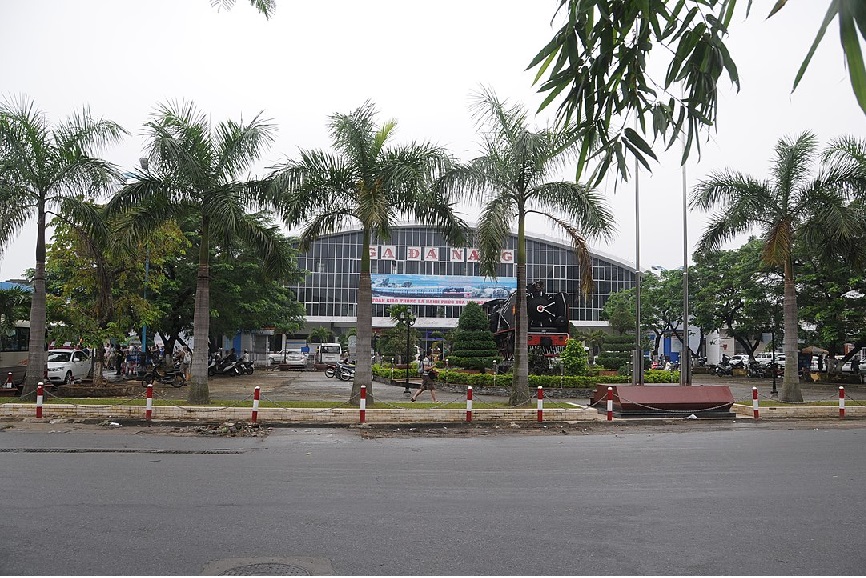 The structure of station

Behind the steam train engine is the main train station. Inside the main office, there are some printing-e-ticket machines and some cafeterias. There are 2 train station platforms in the railway station. After getting your ticket scanned, you will enter the passenger lounge that leads to the train station’s platforms. 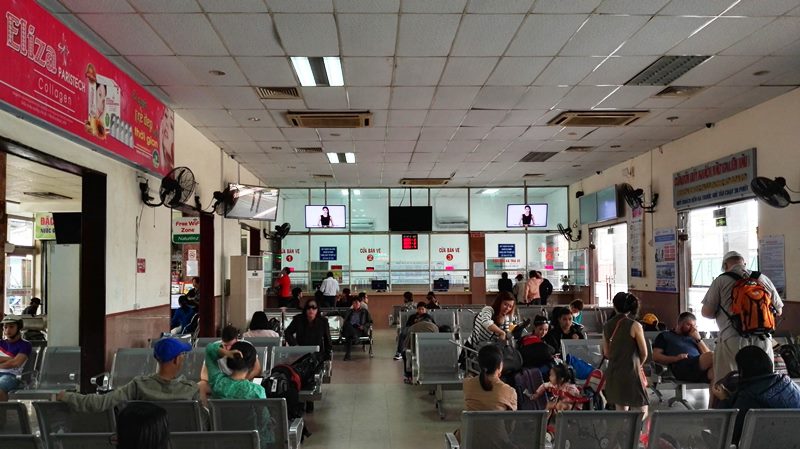 The station’s platform is spacious so passengers can take a break while waiting for the train. It is equipped with 200 seats, toilets, and arrival and departure screen…Luggage storage is next to the ticket office where you can store your bags, and send your motorbike to desired places.

Open from 6 am to 11 pm, this office is in a separate building, just to the left of the main station. There are five ticket counters, plus a restroom and a small, air-conditioned waiting area. You can buy your train tickets here for your journey from Da Nang, as well as for other train trips you plan to take in Vietnam. 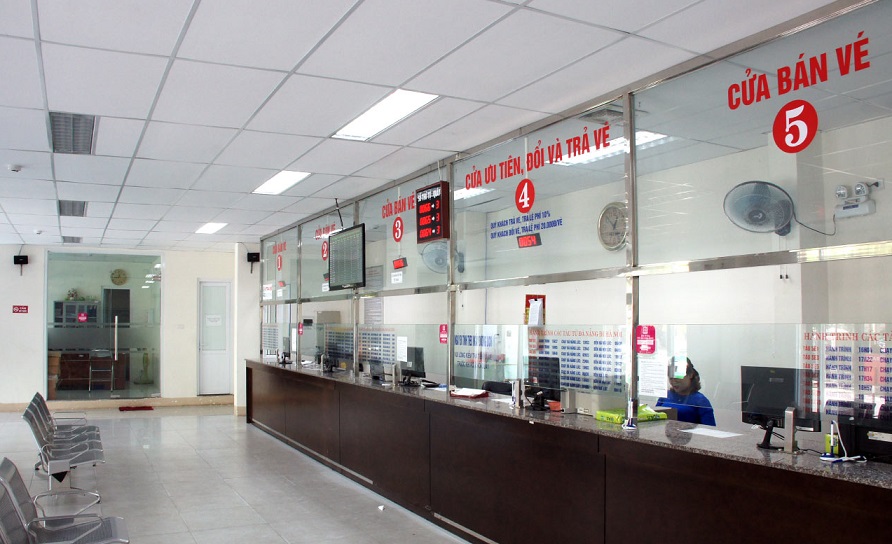 Da Nang’s station is small but still has most of the basics you might need for your trip. Da Nang railway station provides basic facilities in order to fulfill passengers’ needs.

Several facilities are provided at the train station, including public toilets, a waiting area, and a car park for the visitors. There are three shops inside the station selling snacks, coffee, and cold drinks, cigarettes, tissues, toothpaste, and other small necessities you may need for your train trip.

If you are looking for noodles and soups, there is a small coffee shop in front of the station selling them. Most of the shops at the railway station close by 5 p.m, and you can get a cold drink from the vending machines just outside the main station. 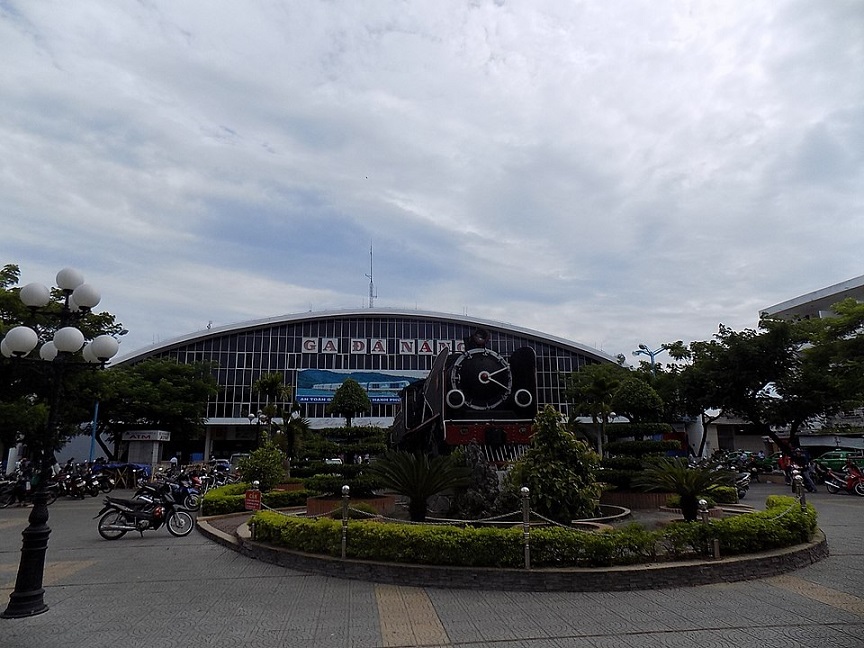 The railway station also has a parking place with a 24-hour service. The parking place is located on the side of the steam engine, in front of the main building. You will be instructed by the officers here when you enter.

Trains from and to Da Nang railway station 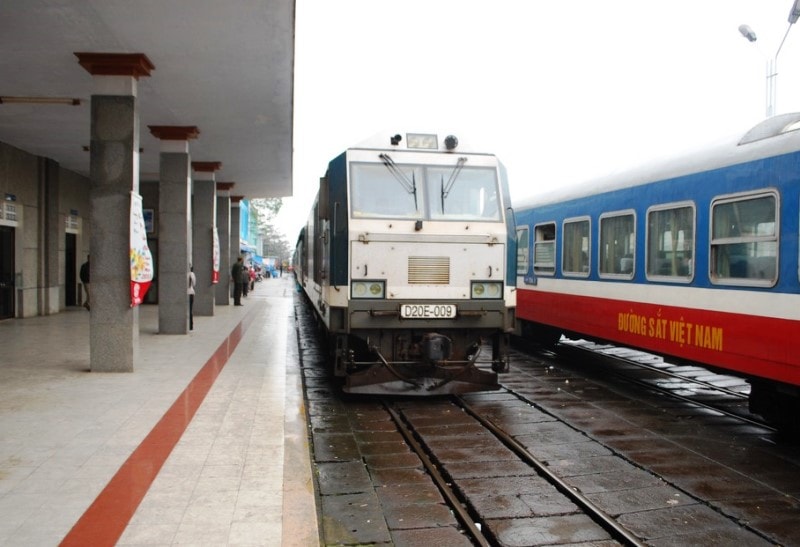 Read more: Da Nang to Hue Train – The Most Famous Route in Vietnam

How to buy train ticket

There are multiple ways to buy train tickets to get to and from the Da Nang train station, as well as any other station along the North-South line. The best option for you will depend on a few factors, explained below. 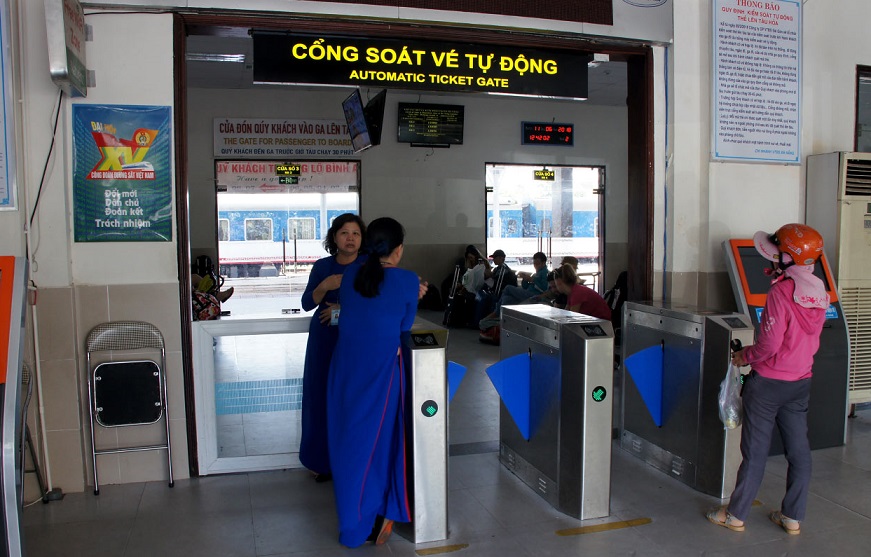 You can purchase train tickets (including same-day tickets) online from 12Go.Asia or Baolau.com. Both sites offer the option of choosing your travel class and train seat from a real-time graphic, as well as options for booking ferries, flights, and buses to reach other regional and international destinations. Moreover, you can buy the online tickets via Vietnam Railways directly at www.dsvn.vn.

If you book on 12Go.Asia or Baolau.com, you’ll receive your tickets via e-mail. Either show the ticket QR code on your smartphone to the attendant or print it out and bring it with you. It may take a few hours to get your ticket via e-mail.

At the train station

It’s easy to get the tickets at the Da Nang train station. Inside the main building, to the left is the ticket office. Because there are many people buying tickets so there is a small ticket machine just inside the main door to get the number as your turn number.

You can get the tickets on the same day or in advance. At the ticket counter, station employees will help you choose the proper ticket with departure time, the seat, train class, that meet your travel needs and budget.

Through an agency or hotel

This is an extra service that all the travel agencies, hotels do to make it convenient and easier for tourists. As you know, nowadays, services are available and easy to do. So if you don’t want to handle the hassle of buying the train tickets by yourself, just ask them for help.

Getting to Da Nang railway station 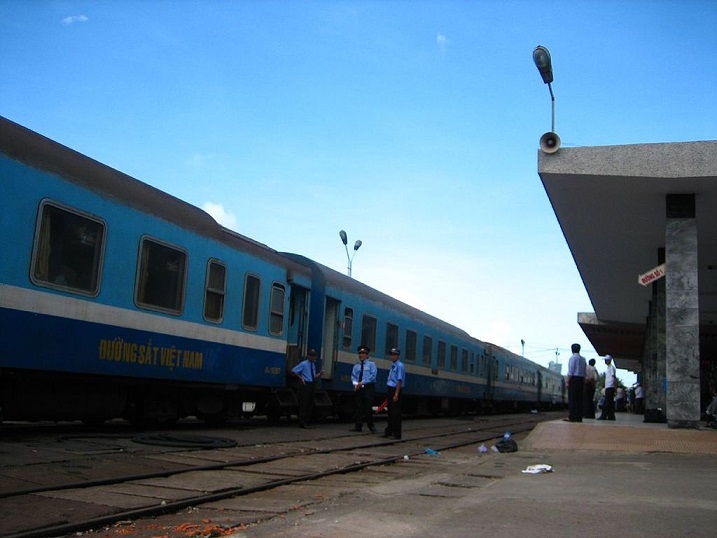 Besides a taxi, you can take a local bus from Hoi An to Da Nang railway station. From Hoi An, you walk to the bus station, take the yellow number one bus. From the bus stop, you can walk to the train station. You use Google Maps to get the direction.

There are a lot of taxi brands at the Da Nang railway station and they are always available. But please remember that taxis in Vietnam are meter taxis so you should ask for the price and make an agreement with the drivers first. 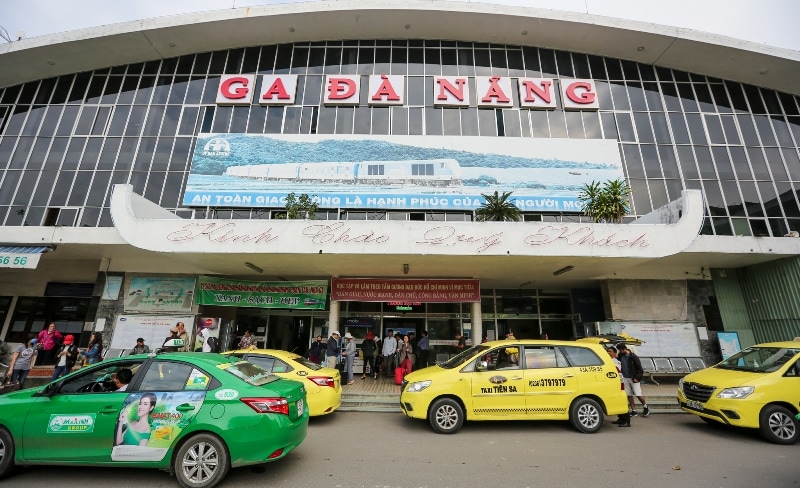 Motorbikes are the most effective and flexible way of getting to the railway. And they would provide an exciting experience in exploring the city.

If you would like to relax and don’t want to deal with all the different ways of transport to get to Hoi An; just book the private transfer service from Da Nang train station to Hoi An. With the same price as the taxi, grabs, but our private car transfer is the door-to-door service. 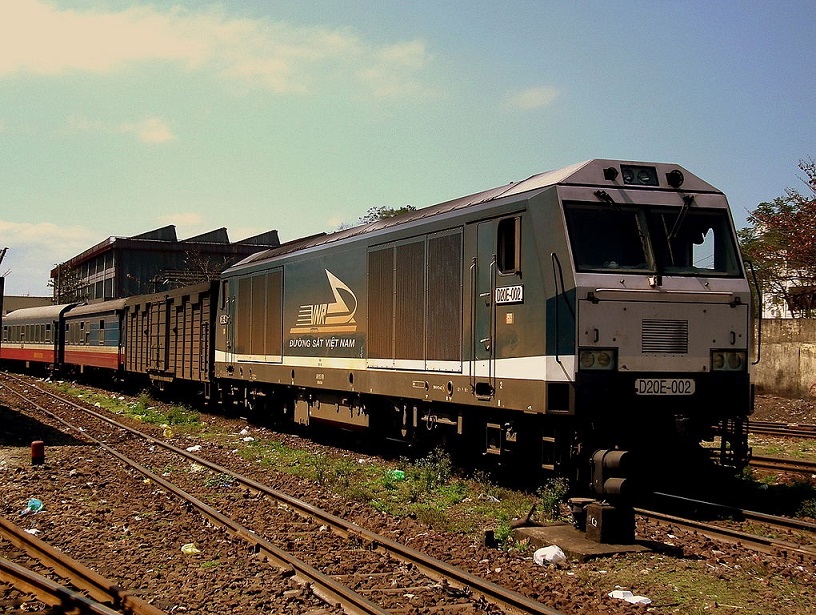 Multiple trains arrive into Da Nang station every day, from Ha Noi, Sai Gon and other stops along the North-South route, allowing for flexibility in your travel plans. The station is easy to navigate, and so is getting from the station to the popular hub of Hoi An. You’ll also be close to Hue and the Hai Van Pass if you decide to take the train into Da Nang.

Guide to Visit the Marble Mountains Without a Package Tour

Guide to Visit the Golden Bridge Like a Pro